BUILT TO LAST: ODPEM takes its message of disaster preparedness to Portmore 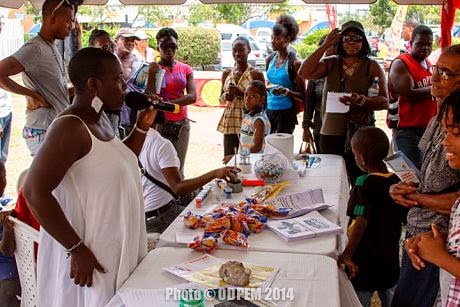 BEFORE THE STORM: ODPEM's islandwide expos fuse elements both informative and fun.

As the Office of Disaster Preparedness and Emergency Management (ODPEM) steps up its work and widens its reach, the agency has embarked on a massive nationwide drive, in the guise of expos targeting businesses, schools and communities, buoyed by the apt theme of "Disasters are a reality; make preparedness your responsibility."

Unsurprisingly, the coastal St. Catherine municipality of Portmore has been singled out for special attention. "The intention behind our drive is really to take the idea of disaster preparedness into the communities. We've been to Portmore a couple of times before, but given the vulnerability of Portmore, like so man other sections of the island, we find it necessary to ensure that we are reaching the people with the information."

Thus explains Cheryl Nichols, ODPEM's Director of Information and Training, adding that the message is really a simple breakdown of what residents need to be doing prior to a hurricane, for instance; what is expected of them when the country is threatened by a disaster; and what ought to transpire in a post-disaster situation. Not exactly new information, Nichols readily concedes, but it remains applicable year-in, year-out. "Over the years we've seen gradual improvements in response to our work, so the message is being bought," she says. "But it's an ongoing task, and as we see where the gaps are we try to plug them. So yes, we are focussing on the hurricane now, but all year we are thinking earthquake and other hazards."

The expansive Portmore Mall proved an ideal venue to host Saturday's ODPEM expo, as it attracted a sizeable crowd — a mix of shoppers, kids and curious passersby who flocked to the booth displays (a variety featuring NEPA, Kirk Distributors, Scotiabank, and others), many of the, sticking around to win giveaways, watch World Cup football on the large plasma screen and get tested for HIV. In other words, the small-scale event ended up offering much more than was anticipated.

Alluding to this day-at-the-fair-like atmosphere, Nichols points out that in spreading their life-saving message across Jamaica, the agency can't do it alone. "Of course, we have our partners. These are entities, both public and private, who work with us in furthering the cause of disaster management," she says. "So we really are expecting persons to tap into the information we have available so that ultimately the mission would have been accomplished." By all accounts, the Portmore expo served its purpose. "Many of us really don't know the proper way to go about preparing for a disaster," Nadine Gordon, a Hellshire-based high-school teacher tells TALLAWAH. "So it's a good thing the agency has come here today to keep us informed."