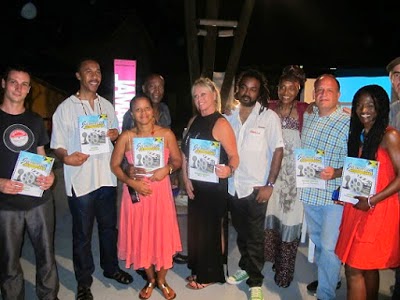 ALL FOR ONE: Prize winners  assembled for a round of picture taking at Island Village, 2013.

In the past, Reggae Film Festival chief organizer Barbara Blake-Hannah has repeatedly voiced concern over, among other things, the continued lack of sponsorship for the event, soon to turns 10 years old. As a result, the 2014 leg of the festival is up in the air at the moment. In a message addressed to the "fans and followers" posted on the RFF's Facebook page last week, Blake-Hannah explained, with the faintest hint of optimism.

"We continue to receive questions asking if and when the film festival will be held in Jamaica this year. We regret that we cannot give a positive answer now, but we want to assure everyone that good news is on the way," the statement read.

Established in 2006 in Kingston, it's first home, the festival was granted some north coast hospitality in 2013, occupying the spacious grounds of Island Village in Ocho Rios in August 2013. It remains to be seen which venue (Kingston-based of out-of-town) will provide lodgings if the 2014 staging gets the green light.

But in spite of the continued challenges, Blake-Hannah further emphasizes, the festival remains committed to its core mission of recognizing the work of emerging filmmakers, many of whom are seeking that initial career break. "We have several new films waiting for the Reggae Film Festival's special international exposure," she said, "and we promise to provide them with the opportunity to shine at home and abroad."