JAMAICA'S GOT TALENT: The JCDC puts exciting young stars on the 'Big Stage' 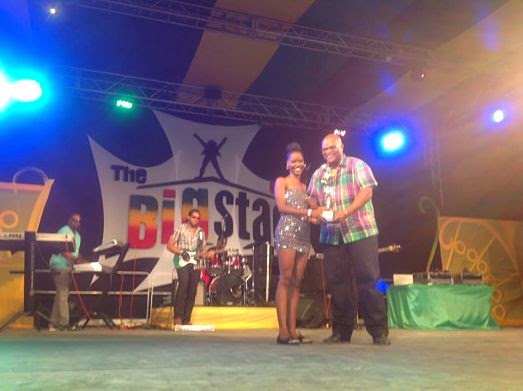 A STAR IS BORN: JCDC Board Chairman, Aston Cooke, presents a trophy to grand prize winner Shauna of St. James.

In almost every nook and cranny islandwide there's a diamond in the rough who never got to shine on Digicel Rising Stars, Tastee Talent Trail or Magnum Kings & Queens of Dancehall, awaiting that singular break sure to catapult them full throttle into the public's consciousness.

That's where the JCDC's Big Stage talent competition comes in. "It's about finding talents strictly at the community level," says Michael Nicholson, explaining the agency's mission of helping future stars get their start. "What we've been doing is looking into areas islandwide that have talents who might have missed the other big events, the other big competitions."

Based on the format of the contest, entrants can work their way up from the community level to the parish level to the big stage national finals, which brings together the best 26 participants, two representing each parish.

Lady Rennae proved a dynamite hostess of the inaugural national finals this past Sunday at the Ranny Williams Entertainment Centre in Kingston, but she was no match for the raft of enthusiastic contestants (deejays, singjays, dub poets, vocalists) who brought a burst of psychedelic energy to their performances. But only one could walk away overall champion, and that honour fell to Toshauna Williams (who goes by Shauna), a pint-sized belter from St. James whose sassy cover of No Doubt's "Underneath It All" secured her the top prize. "My father encouraged me to enter the competition, so I decided to give it a go, and I've won," says an animated Shauna, who cites Cherine and Tessanne among her influences.

Determined to use the victory as a launching pad for something bigger, the twenty-something singer has rightly set her sights on following in the footsteps of her idols, with plans to launch a recording career this year. With an outsize talent like hers, we're certain she'll have little difficulty getting the proper notice she so deserves.