KINGSTON AS CANVAS: A brilliant new exhibition showcases the skill and style of street artists 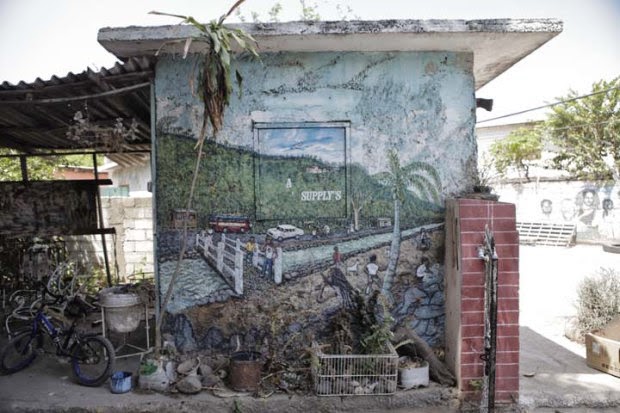 ON THE CORNER: Ricky Culture's Shack (2008), as photographed by Olivia McGilchrist.

On any given day, a trip around city Kingston will reveal a plethora of work by unknown street artists, their awe-inspiring talents and insistent perspectives on full display. You get a bit of everything, from graffiti-induced renderings of protest rhetoric to iconography depicting community heroes and cultural icons. Think of areas like Hannah Town, Luke Lane and Three Miles, where you'll find the handiwork of men like Kemar Black, Anthony Brown and Cleaver Cunningham splashed across walls.

As practising artists in their own right they do have something to say and people with power and influence have been taking note. For its latest exhibition, Anything with Nothing, the National Gallery has sought to bring some of this thought-provoking art indoors, drawing attention to the efforts of 10 of these urban visual chroniclers. It's a move that, in a serious way, lends validation to the work of street artists everywhere. What's more, when the research team asked a few of the participants on view to reproduce samples of their pieces for the in-house setting they practically leapt at the opportunity.

The overall result is an arresting, kaleidoscopic combination of skill, visual panache and unique styles that reflect the complex realities of life in the city then and now. It pulses with a curious energy and on deeper inspection of the murals, portraiture and video installations you realize that Anything with Nothing is more than just an exhibition; it's a testament to the unsung contributions of urban storytellers of a different stripe.

The numerous highlights include Waterhouse's Andrew 'Designer Ice' Thomas' iconic portraits (including one of a Beijing-triumphant Shelly-Ann Fraser-Pryce), Vernon 'Howie' Grant's DeLaVega City-based multi-textured wall drawings and Black's gritty-witty Untitled series. But the accolade for the most compelling entry must go to Ricky Culture's tense and intriguing Judgement Day, which depicts a horse-riding Haile Selassie and the Pope in the heat of combat.

Yet the gallery's curatorial team (led by chief curator Charles Campbell) didn't even get to include several of the choice artists they'd really hoped to showcase. But for Campbell, one thing is clear. "The exhibition demonstrates the abundant talent that resides in communities throughout the island," he writes in the catalogue that accompanies the exhibition. "Much of what these artists document falls outside of our official histories. And although the National Gallery is often seen as an artistic validator, it may be more important to consider as valid what happens outside these walls."