NOW AND THEN: The Blackburns' groundbreaking 2014 season fuses events past and present 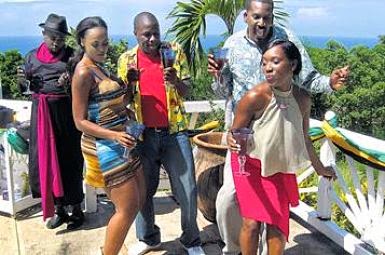 LIFE OF THE PARTY: Actors working up a sweat in a scene from the show's 2013 season.

In spite of fluctuating ratings, Royal Palm Estate's spin-off series The Blackburns has managed to remain a healthy and viable product, due in large part to the mix of drama, deceit and laugh-out-loud humour that's got it's most devoted CVM viewers hooked. Then there's the new blood (the fresh additions to the cast) that is pumped into the show each season.

The impending anniversary season - coming 20 years since the genesis of the original Royal Palm Estate - is no exception. "We have a major new addition to the cast, Deanna Allgrove, who was actually a part of the family when the show just, just started," explains showrunner Lennie Little-White. "Nobody will recognize her. She's all grown up, and it's a brand new character we're having her portray." Filming is set to start in earnest next month.

As TALLAWAH also learns, the 2014 season will see classic storylines featuring RPE stalwarts (some now deceased) being reintroduced and old conflicts resolved. Allgrove's character will play a vital role in tying up some of the loose ends. "Without giving away any secrets, she's going to be instrumental in linking the past with the present," the director says of the Canada-based actress, whose screen credits include major films out of Vancouver and the United States. "It's a new concept we're trying out because of the many requests we've received from people wanting to know what happened to so-and-so."

Case in point: Will the real Miss Joyce please stand up? What eventually became of Tiney Winey? What was the real end of Ted Blackburn's story? The new-look season promises to provide answers to these and other burning questions. At least one veteran of the RPE franchise is confident the show will yield its most thrilling moments yet. "I've been a part of the show for a very long time, and it's always been fun," explains actor Michael Nicholson, who plays Stringbeans. "And the writers who come up with the storylines do a very good job everytime."

> TESTIMONIAL: Nicholson on the brightest points of his RPE journey
"Being on the show has been absolutely wonderful. It's made me quite a popular person in the country as an actor, and people continuously call me Stringbeans, which I don't mind. I've never had a problem being called Stringbeans by anybody. People think I'm upset by it, but I've never been. On the show my character has moved up in the household, and it will be interesting to see what happens to him next."