ON HER OWN: Honing her purpose and passions, Naomi Cowan keeps her eyes on the prize 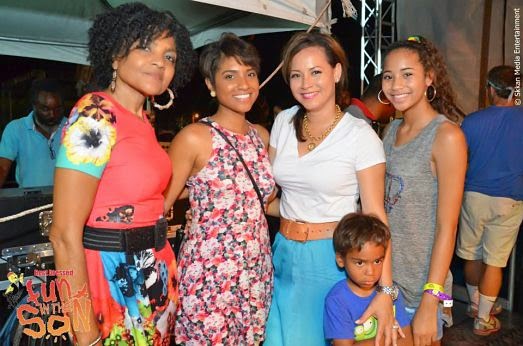 ALL IN THE FAMILY: Naomi (second left), with fellow Cowan girls (from left), mom Carlene, aunt Sara, and niece Heaven Connor, at Fun In The Son 2014.

"The energy really comes from my passion for ministry," says Naomi Cowan, alluding to the zest that characterizes her live performances, most recently on vivid display at Saturday's Fun In the Son festival in Portmore. You can say this for Miss Cowan: the girl knows how to work a crowd. Accompanied by a trio of competent backing vocalists, the TV starlet-turned-praise and worship songstress turned in a brisk set of covers and originals dripping with flavour and fervour. "I used to party a lot and give my energy to a lot of other things and a lot of other people," she reflects. "So to give my energy to God now feels amazing."

Come to think of it, Naomi, who practically grew up in the church, represents the emergence of a third generation Cowan intent on leaving an indelible mark on the gospel industry. Still, she is her own woman, so the Cowan name notwithstanding (mom is Carlen, dad is Tommy Cowan, both living legends in their own right) Naomi doesn't feel pressured to live up to any expectations but her own. "The responsibility is not a burden; it's a joy," she says.

"It's a privilege to be able to serve the Lord and to be able to represent his name. Before, I used to think that Christianity was a commitment that would take away from my life, but it's only added more."

If life is what you make it, then Naomi Cowan is making sure she has no regrets. These days, as she looks to enter her third decade on the planet, her life continues to take interesting turns. She recently moved back to Canada, where she's employed to her alma mater Ryerson University as a digital content producer ("It's a lot of video work."). And she fully intends to embark on a Master's programme in September, laying the foundation for the building of her very own media empire a la Lady O.

"I can't wait for what's next," the 28-year-old says. "I do feel like I've learned a lot. I've grown so much. My perspective on certain things has changed, so whatever is coming my way I know I will be mature enough to handle it."