PRINCESS IN THE HOOD: Gospel Song winner Keneisha Smith rises to the occasion 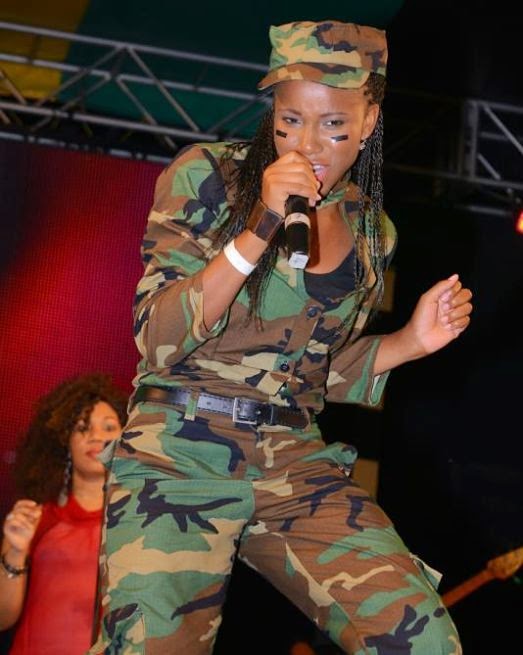 STRONG SUIT: Smith performing her winning entry at the national finals on Sunday.

Keneisha Smith grew up in the tough Spanish Town community of St. John's Road, but she'd long decided she would never let the stifling, less-than-ideal circumstances of her hard-scrabble neighbourhood cripple her ambition and yen for progress. "Looking back now feels awesome. I'm coming from the ghetto, real ghetto, but I knew I was never going to let where I come from determine where I ended up or what I achieved in life," recalls the diminutive Smith, a former University College of the Caribbean student.

On the cups of 22, Smith became one of the youngest ever winners of the long-running Jamaica Gospel Song competition, whose 2014 grand finale rocked the Ranny Williams Entertainment Centre on Sunday evening. Unsurprisingly, Smith credits her momentous triumph to hard work and her unwavering Christian faith. "I serve a God who is the king of the universe, and I am a daughter of the king," says the singer, an active member of the Holiness Christian Fellowship Church, situated in Willowdene, St. Catherine. "[The win] is truly a blessing from God, and it feels really, really good."

The biological offspring of a popular St. Catherine-based deejay/selector, Smith reveals that from a tender age she found herself trying to keep pace with dear ol' musical dad. "I would always be deejaying with him, and I remember when I gave my life to the Lord (around the time of her sweet 16), I asked for inspiration to be able to sing with my father. And that's how I got the the song "Prayer Warrior." As it turns out, the song - a jaunty, militant ode to the power of supplication - won over the competition's judges, who not only awarded Smith top marks for its uplifting content and rousing message but also voted her Best Performer and Best Lyrics.

Watching Smith storm the stage, prance and wave, before dramatically dropping to her knees left little doubt that she is indeed "a prayer warrior for the Lord" who knows how to ride a slick beat. Living legend Joan Flemmings agrees that Smith is something special. "When I saw her onstage, I was blown away," Flemmings tells TALLAWAH. "I told her afterwards, 'You have it.'"