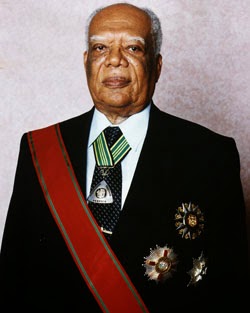 "As the elder statesman of governors-general and presidents of the region, he organized with his counterparts frequent meetings where they brainstormed and frequently agreed on a common basis of operation.....As the nation mourns this loss, let us perpetuate on the memory of Sir Howard by recognizing his life of service and leadership as we continue the nation-building process." — Governor General Sir Patrick Allen
**

"It's impossible to overemphasize [Sir Howard's] contribution to this nation, which he has served with distinction, passion and selflessness. Having spent 23 years in the classroom [he] had a natural empathy and caring spirit. None could fail to be moved by his warmth, broad and endearing smile and his captivating generosity of spirit. He embraced all and was a model of inclusiveness and non-partisanship." — Prime Minister Portia Simpson-Miller
**

"As Sir Howard has pointed out, all of us in Parliament and ultimately all Jamaicans have contributions to make towards the development of our country. We recognize him as a great Jamaican leader in education, politics and philanthropy." — Opposition Leader Andrew Holness
**

"Personally, I have lost a mentor and a colleague and one who was more than a close friend. Love and duty require that we must summon the strength and the will to give Lady Cooke and the entire family whatever they may need to cope in their bereavement." — Former Prime Minister P.J. Patterson
**

"The passing of Sir Howard Cooke has taken from us the last surviving pioneer of Jamaica's modern democracy. In all his undertakings, he has served with exemplary dedication and humility and he has left a huge legacy that for a long time to come will be a source of reference for public service." — Former Prime Minister Bruce Golding