THE ROYAL WE: Back in the limelight, Usain Bolt kicks it with Kate Middleton and the Princes 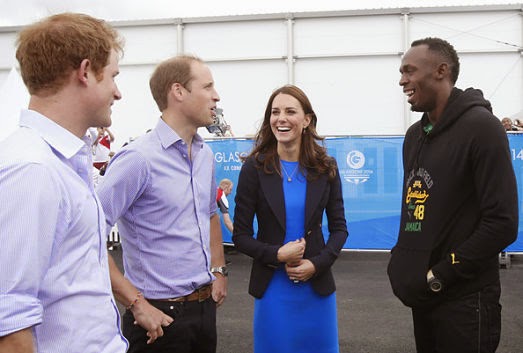 LOOK WHO'S TALKING: The royal heirs chatting up the World's Fastest Man in Scotland.

Injury-free and anticipating a solid relay-leg performance on the track, the World's Fastest Man made a welcome return to the spotlight this week, holding court inside the Athletes' Village at the Commonwealth Games in Glasgow, Scotland. Comfily attired in trademark designer duds, Bolt was snapped sharing candid conversation and a few laughs with heirs to the British throne Prince William, Catherine Middleton and Prince Harry. (Baby George was MIA).

Wonder what they gabbed about. An upcoming poker night at Buckingham Palace? A Christmas trip to the Caribbean? It's anyone's guess, but you can conclude that their banter was lighthearted and free-flowing.

On a more serious note, we'll have to wait and see what magic tricks the trailblazing sprinter has up his sleeves this season, but TALLAWAH remains convinced that whatever the results, they'll have tongues wagging in the sporting world and elsewhere, leading up to next year's World Championships, where it's expected that Bolt will face mighty competition from young upstarts like Kemar Bailey-Cole and Nickel Ashmeade and perennial rivals Justin Gatlin and Yohan Blake. After all, it's Bolt's mission to mystify and lead the sport of athletics into exciting new realms.

Meanwhile, since last appearing on the international scene, the world record holder has been busy diversifying his global brand, while maintaining close ties with sponsors Puma and Virgin Media, for whom he's currently starring in a new UK TV ad spot. Now we hear he's poised to make the obvious next step by teaming up with famed American investor Horace Madison (rapper Lil Wayne's business manager) to birth his very own prepaid debit card!

Plans are still at the infancy stage, according to one report, but like any smart businessman, Bolt (and his management team) is one who concerns himself with not only pleasing and surprising his legions of admirers but, perhaps equally important, what's coming next.