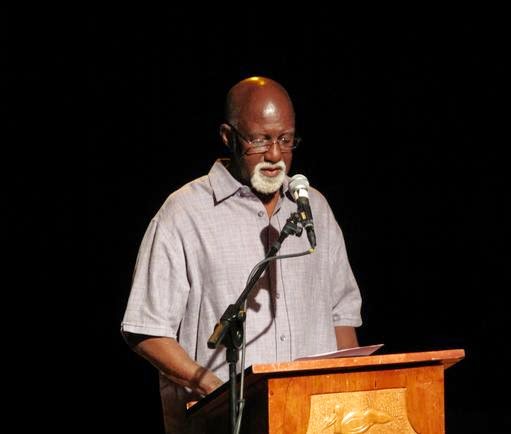 SPEAKER'S CORNER: "Things are just getting off the ground," says the celebrated scholar of his plans as Poet Laureate.


If there's a single Kingston event that draws a room full of gifted writers it's the annual Jamaica Creative Writing Competition/Exhibition awards ceremony, put on by the Jamaica Cultural Development Commission (JCDC). This year's leg, hosted by the Knutsford Court Hotel in New Kingston, got its share of star power, thanks to appearances by the likes of ace playwright Basil Dawkins (on hand to collect an award for his entry Reggaemento, intended as a Jamaican musical), Dahlia Harris (who served as MC), Aston Cooke (now JCDC board chair) and Prof. Mervyn Morris, who delivered the keynote address.

Following the ceremony on Tuesday, TALLAWAH spoke to Morris about taking on the role of a lifetime as Jamaica's first poet laureate since Independence. Does he find the responsibilities even a tad overwhelming? "The initial publicity was," he admitted, but hastened to point out that effectively collaborating with the National Library of Jamaica will ensure his three-year tenure yields indelible results for Jamaica's literary culture. "I want to do some poetry workshops in different parts of the island and a few readings, too," Morris announced. "Things are just getting off the ground."

Professor Morris also said he hopes to interest members of the print and electronic media in carrying selected Poems of the Week to help generate publicity for the work of his new office - and ultimately establish a digital archive at the National Library.

Meantime, the Jamaica Creative Writing Competition's 2014 batch of medallists comprised eight gold medallists, 16 for silver and 23 for bronze. Certificates of merit were also handed out in the usual categories of poetry, plays, short stories, novels and essays.

In the end, St. Catherine-based poet Seon K. Lewis was named Best Overall Writer. And as a coda to the evening's proceedings, the electronic version of the commemorative short story collection, The Gold Anthology (in honour of Jamaica 50) was officially launched.