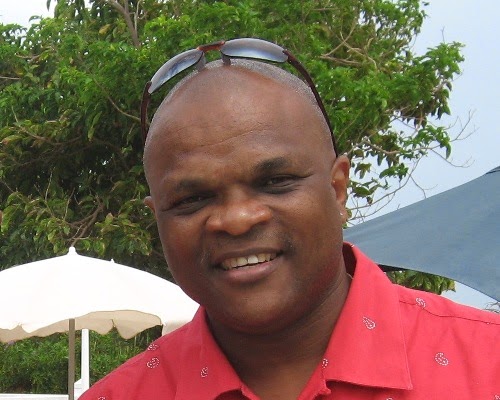 MAN FOR THE JOB: "I draw on my knowledge of JCDC events and activities," Cooke admits.

Sporting a smart lime-green shirt, jeans, shades and a 'boasy' Panama hat, Aston Cooke walks with the confident air of a high-school principal as he surveys the on-the-ground preparations in full swing, hours before the scheduled 8pm start of Mello Go Roun' at the Ranny Williams Entertainment Centre. A minute after observing the assembly work being carried out by the lighting crew on the main-stage, he heads over to an adjacent tent where a bunch of young male drummers are working up frenzied beats that soon draws a modest crowd. Cooke lingers for a few, nods approvingly and within a flash he's gone, to inspect the nearby line of booths, the primary attraction on this Emancipation Day opening of the Independence Village.

As the new Chairman of the Jamaica Cultural Development Commission (JCDC), Cooke's overseer-style role is a natural fit for this 41-year-old son of the performing arts who has consistently brought his keen observations and sharp wit to theatrical works (most famously Jamaica 2 Rahtid and Single Entry) that wittily chronicle and celebrate Jamaican life and culture. A member of the JCDC board since 2012, Cooke assumed the chairmanship this year, on the invitation of Youth and Culture minister Lisa Hanna. It's a role he succinctly summarizes as a guiding hand leading the 50-year-old agency in tackling matters of policy-making and cultural direction and "helping it to better carry out the mandate that's been set."

The post comes with considerable influence and power, to say the least, but Cooke is unfazed, ever choosing to see things in their simplest forms. "For me, I draw on my knowledge of JCDC events and activities and that kind of helps me to put the whole organization into perspective," he reflects.

Cooke readily sings the praises of everyone at the JCDC, citing the sparkling success of Mello Go Roun' as a prime example of collaboration of the highest order. "A lot of people see Mello Go Roun' and don't know that Mello Go Roun' is actually the end-product of several months of hard work through the [islandwide] Festival of Arts programme," the Chairman reports. "I've talked to some of the workers, and they tell me they leave their houses at [wee hours] in the morning to drive to [places like] Westmoreland to do workshops in a little district, in a school hall or a church hall. And they do a lot of that every year. It's a lot of hard work."

If Miss Lou were alive today, I later ask him, how do you think she would assess the efforts of today's generation to preserve the cultural heritage? "I don't have a clue what she would say," Cooke laughs, "but I do know what Miss Lou would appreciate: that we have tried to be true to our language and our Jamaicanness, and we continue to put on events like these. I think she'd be proud of that."