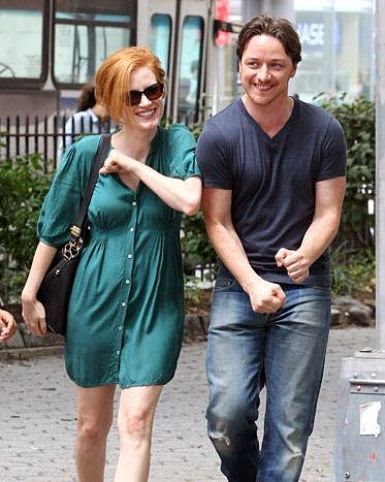 IT TAKES TWO: Chastain and McAvoy, the stars of the romantic drama Eleanor Rigby.

Playing off each other's luminous brilliance with the fierce intensity to match, Jessica Chastain (The Help) and James McAvoy (Atonement) star as a happily married couple who suddenly find themselves longing to understand each other in the wake of a tragedy. That's the skinny of The Disappearance of Eleanor Rigby, whose immaculate two-and-a-half-minute trailer hints at writer-director Ned Benson's art-house sensibilities. But it's the piquant and passionate chemistry exhibited by its accomplished and attractive leads that gets the pulse racing and make the film a veritable must-see. And with its sturdy supporting cast (the likes of Ciaran Hinds, Isabelle Huppert and Viola Davis) to boot, it has awards-season bait stamped all over it.

Kevin Kline (A Fish Called Wanda) squares off against Maggie Smith in My Old Lady (arriving September 10) as a down-on-his-luck New York native who arrives in Paris to see about the apartment he's inherited from his estranged dad, only to find it occupied by a crabby old coot (played by Smith) who won't budge. Israel Horowitz directs this dialogue-heavy piece (co-starring the always welcome Kristin Scott Thomas), in which we are fully counting on Dame Maggie to deliver some of those stinging one-liners a la her imperious Dowager Countess on Downton Abbey.

Expectations are also weighing on Nicole Kidman, on whose pert shoulders rests the bestseller-to-big-screen psychological thriller Before I Go To Sleep, written and directed for the screen by Rowan Joffe (The Quiet American). The Oscar winner plays a middle-aged woman who wakes up every day with no memory due to a traumatic episode from her past. Her doc (Mark Strong) and her hubby (The King's Speech leading man Colin Firth) do their best to cope.

Our favourite girl-next-door Taraji P. Henson (Baby Boy, The Curious Case of Benjamin Button) finds herself entangled in a lethal web when her home is invaded by a charming stranger (played by Idris Elba) who uses the car-trouble bit to smooth-talk his way into her home, before revealing his hidden agenda. Terror ensues. The cinematography steals the spotlight in Memphis, in which a lavishly gifted singer embarks on a soul-searching and self-discovery sojourn through the mythic city, in a film directed by Tim Sutton, and opening in limited release on September 5.

Meantime, Warner Bros and director Shawn Levy have rounded up an A-list ensemble for This Is Where I Leave You, the long-anticipated film adaptation of Jonathan Tropper's bestseller. The fierce dramatic comedy, in cinemas September 19, brings together for the first time Jason Bateman, Tina Fey, Adam Driver and living legend Jane Fonda for what one can reasonably predict will be a side-splittingly funny evening at the cinema.