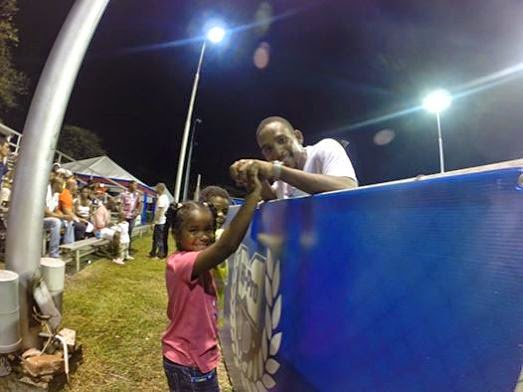 THE CHAMP: Johnson greeting young fans following his triumph at the Liguanea Club on Saturday night.

Being number one is hard work. Just ask Damion Johnson, the court veteran who has held the distinction of being the top-ranked tennis player in the country for the past ten years. "It keeps you focussed because you have to be a role model for the younger generation. They look up to me, and I take that very seriously," the 29-year-old Johnson says, having just wrapped up yet another championship triumph: the Hi-Pro All-Jamaica senior Men's Open title at the Liguanea Club on Saturday night.

Johnson, who is no stranger to putting in stellar performances and reaping the fruits of his labour (he has the multiple trophies to prove it), has every intention of continuing his winning ways. "Everyone wants the top spot, so that keeps me motivated," he tells TALLAWAH. "I have to stay on my A-game."

Attributing his swift ascent in the sport to dedication and countless hours of training and fine-tuning, Johnson has fashioned a side career for himself as a coach who has worked with rapidly emerging stars of the game like Blaise Bicknell. "My aim is to add to the number of top junior players that already exists in the country," the sportsman explains. For his own future ambition, the sky is the limit. "I'm looking forward to staying on top of local tennis," he says. "I'm still young so I have several more years to look forward to as a player."

That's a masterpiece of an understatement, considering that the just-concluded All-Jamaica tournament also drew participation from old pros of the game competing in the Junior Veterans league (35 years and over) and Senior Veterans (45 and over). The women, though few in numbers, also made their presence felt, with 13-year-old sensation Selena Blythe scooping up the junior women's crown and Phaedra Kepple dominating among the seniors. "We had a great tournament," Tennis Jamaica prez John Bailey conceded in his address at the trophy presentation. "I do hope this is a first in a series of well-supported tournaments to come."

In spite of the torrential downpour that preceded the finale, the tournament's most engrossing delight was the show-closing Men's Doubles Final that saw Johnson and singles rival Daniel Harris teaming up against the fiercely competitive (and much younger) Martin brothers, Kyle and Christopher. A white-hot battle of wills ensued much to the excitement of the large turnout that packed the stands. In the end, Johnson and Harris proved better on the day, but the Martins (who are destined for greatness in the sport) certainly put them through the ringer.