PLAYING THE PART: Courtney Wilson's work is no joke in Funny Kind 'A Love 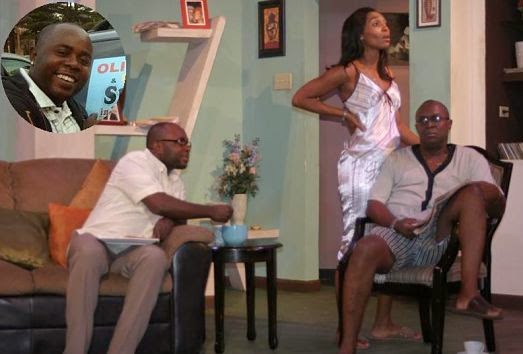 ROLE CALL: The actor's latest performance pulls him out of his comfort zone. Wilson (left), with costars Campbell and Sakina Deer.

Having made a laudable career out of playing conflicted characters grappling with the steep consequences of choices made, Courtney Wilson has never backed down from a challenging part. But nothing could prepare hims for the emotional behemoth that is Carlyle Grant, an adulterous brother who commits the ultimate family no-no — and pays the ultimate price — in Patrick Brown's just-opened Funny Kind 'A Love, a smartly acted, humorous and brutally honest domestic dramedy costarring the Jambiz crew.

Wilson is superb in the role, nailing both Carlyle's neediness and a facade of steely resolve that soon comes back to haunt him. The thirtysomething Actor Boy winner, EXED alum and Vineyard Town businessman by day chats with TALLAWAH about the greatest challenge of his acting life so far — and the power of relationships to dually make and break us.

TALLAWAH: The role of Carlyle could have proved daunting to lesser skilled actors, but you nail it with flying colours.
Wilson: It was a great challenge because it's the first time I'm playing this kind of role. A lot of sleepless nights. [Carlyle] is not like Courtney, but I pulled through. Did you do any on-the-street research? I definitely had to visit a lot of different places and associate with a lot of different people to get it right.

The play's Big Themes of family, adultery, honour and betrayal are quite provocatively explored. How close to home did the story hit for you? Could you relate to any of it in any real way?
I think some parts of it reflects my personal life and some of my past experiences because I've lost a loved one and I've been in relationships that have gone bad.

Things take a heartrendingly sad turn towards the end. A lot of viewers won't see that coming.
I think it's a director's choice, for one, and I guess [Brown] wanted something different because over the years [our regular patrons] have become used to the happy comedic endings. So it was a different approach this time.

Play Love Doctor for a minute: How can young couples, like the ones depicted in the story, get it right in their relationships?
No matter what, things can work out at the end of the day. Everybody makes mistakes; we're all humans, and we all have that urge inside that sometimes we can't control. In relationships there's hardly anything that is unforgivable.

Why did you become an actor?
I think I was born for it. Growing up and attending school I was the class clown. People were always telling me that I'm the next Oliver Samuels. And I never expected to end up in the company of a Glen Campbell and an Oliver Samuels [as professional colleagues]. Being an actor is basically me being myself. [Acting] is something that I just love. I can't explain t. It's something I've wanted to do from I was small.

Your life in the theatre began at the EXED Community College, where you completed a degree programme in the performing arts. But how did you make the transition to the commercial world of Jambiz productions?
After leaving EXED I was recommended by Orville Hall to fill in for him for a role he was doing in Cindy-relisha. After that I joined the workshop at Centrestage, and from there it really took off.

And you've certainly come into your own. Every serious thespian hops to evolve and you're clearly no exception.
I think I've grown a lot. Looking back on some of the roles I've done, I admit I was young in certain ways. But I've matured in terms of timing and being more relaxed in my roles. I don't have to fight the performance. It comes more naturally now, with learning how to be truly in character. And working with experienced actors like Oliver and Glen, I've learned a lot. For me, it's an achievement and I'm very grateful.