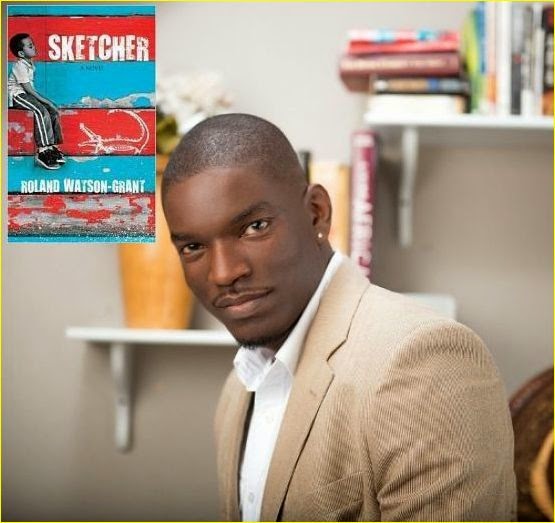 MAN OF HIS WORD: "I think we have reason to be hopeful," the writer says of Jamaica's book culture. Inset, the cover image of Sketcher.

Some writers come to the page to explore and express themselves, while others are far more concerned with examining the human condition and why we're here. Count among the latter group Roland Watson-Grant, the ascendant Jamaican author whose debut novel, Sketcher (Alma Books), a whip-smart coming-of-age saga, has been lauded by publications from Kingston to the US to the UK — with Spanish and Turkish translations in the works. Buoyed by strong reader feedback, the novel's sequel, Skid (named for its precocious kid narrator) is poised to hit bookstores very, very soon. TALLAWAH spoke with the superbusy storyteller (and ad exec by day) about confronting the demands of the writing life and what the future might hold for him.

TALLAWAH: Kudos on penning a fascinating first novel. How have you been meeting the challenges that come with being a writer intent on achieving greatness?
Roland Watson-Grant: I guess one of the major challenges would be finding my voice as a writer. I can't say I had a lot of challenges in terms of getting published; I can't say that. But putting together the material and making it fit my expectations and the publisher's expectations took a lot of hard work.

Your style is a blend of the Afro-Caribbean and the deep-south North American. Who are some of the writers who've influenced you over the years?
Starting with the Caribbean, I always say Olive Senior. Holy Grail, namely Summer Lightning. Read it when I was 13 at KC, and that really said to me, You can write. Also Jean Rhys, Gabriel Garcia Marquez, James Joyce, Mark Twain and J.D. Salinger. Those were some of my main influences.

Did the positive response to Sketcher take you by surprise?
No. I'm more surprised at what Sketcher is still doing. Getting into places I never knew it would reach. It will soon be published in Turkish, and we have more foreign translations coming up.

Tell me: what do your readers find so appealing about the story? What has them hooked?
I think apart from the different cultures that are represented — Caribbean, African, Asian and French — the strongest thing about the work, as one reviewer in The Spectator said, is the voice of Skid. He is naive but speaks some truth to power. He is the kind of child narrator that can be problematic but he speaks about very adult things but in an innocent way and you still get the point. He is like a person you're listening to rather than reading.

Are you concerned or satisfied with the way things are currently in Jamaica's book culture?
I think we have reason to be hopeful, apart from the fact that things are expensive when it comes to reading for leisure. But I think we have a very exciting place here in Jamaica, where people can discover what our literary artists are doing. We have reason to be proud of that and watch it develop.

Do you have other stories you want to tell after Skid has said his final piece?
Absolutely. I'm working on my fourth book right now. The third one which is coming up will actually be a collection of short stories, which I am trying to find a publisher for. I'm very picky at this point. I'm really looking forward to getting it out there because it gets into the mundane Jamaica that we know, without any filter.

At 40 years old, do you still have big dreams?
Oh absolutely. Film scripts, songwriting. If I get one Top 10 song on the Billboard charts, I'm done. I'm not doing anything else (Laughs).

A reggae song?
It can be any [genre], but a reggae song would be nice. If it is something that speaks about the human condition and not just let people jump up and down, that's good.