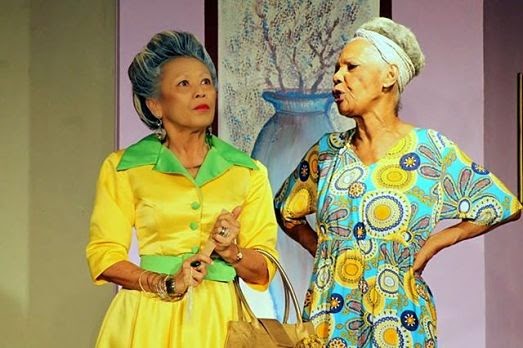 What's the skinny on theatre's awards season race so far? It's way too early for any definitive pronouncements, but TALLAWAH is keeping an eye on these five outstanding actors who have emerged as early favourites with their fantastic performances. Boasting spark and emotional heft in equal measure, they have a strong shot at being remembered at the end of the year:

Camille Davis in Funny Kind 'A Love
The brash and boozy Josephine, a loose-tongued sister who tells it like it is, is not the brightest bulb in the tanning bed, but in Davis' knowing hands you'd be hard-pressed to find a more wise-to-the-world soul. Reeling off the Patrick Brown-penned lines with relish and sharp comedic timing, Davis turns what could have been a caricature into one of the year's most indelible creations. Brava!

Leonie Forbes in For My Daughter
Has Miss Lee ever turned in a bad performance? I seriously doubt that. The legendary drama queen is at her imperious best as a matriarch of a certain age - and three-generation household - grappling with everyday family matters and harbouring a shameful secret that could ruin everything. David Tulloch's play is a tour-de-force, and that's an apt description, too, for Forbes' turn, equal parts intense and incandescent.

Dorraine Reid in Anancy Chaptaz: Monkey Bizniz
A relatively unknown talent, Reid had her work cut out for her to convince as primate leader Baboon in the IAM's most recent Anancy Chaptaz instalment. TALLAWAH highly commended her performance earlier this year, as she managed to pull of something fascinating (down to the very body language), which suggests in no uncertain terms that this is a talented actress who deserves to be better known.

Terri Salmon in For My Daughter
Last year's Thespy winner for supporting actress (Jamaica Sweet), Salmon could be in the running for the second consecutive year, thanks to her robust (and incredibly humorous) transformation into the pompous doyenne and pha-ma-cist Vera LuChen, a role suited to the actress' elastic charm and utter commitment to character building.

Courtney Wilson in Funny Kind 'A Love
A steady stream of meaty Jambiz roles has made Wilson one of the most consistent stage actors of this Jamaican generation. He further solidified that rep with an ovation-worthy portrayal of his most challenging character yet, Carlyle, a decent middle-class fellow who makes a jolting confession to his older brother (played by Glen Campbell). It's a moment realized with a commanding blend of guilt-ridden intensity and surprising restraint.