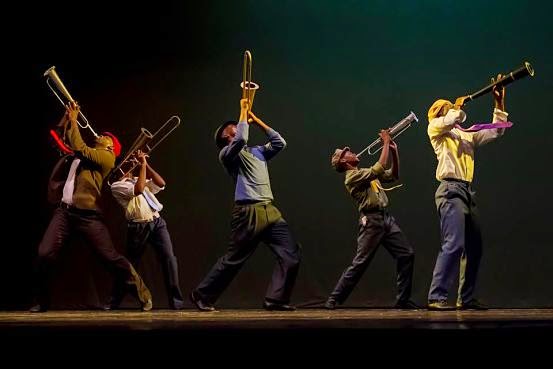 Choreographer extraordinaire Chris Walker may have titled his latest creation, "Rough Drafts," but it is every bit a modern masterpiece. Making its world premiere at the just-concluded 2014 season of the National Dance Theatre Company, the blockbuster piece, interweaving ideas of history, strength and the human spirit with hyperkinetic movements, was one of five new works debuting this year. And what a fine addition to the NTDC repertoire and to Walker's solid body of work.

For those who didn't make the trip to the Little Theatre, "Rough Drafts" is best described as an avant-garde epic with a futuristic slant, powered by Walker's innovative conceptual framework and Dexter Pottinger's attitude-laden costumes, which stood out against a sea of eye-popping red, props included. And that's another appealing quality the dance possesses: the attention-grabbing imagery, particularly poignant when the dancers come together like an army of revellers in a sequence of dizzying vibing and jiving. The spirit of jubilation the work evokes is nothing short of palpable and intoxicating.

The same could be said of the timeless "Gerrehbenta," the company's perennially reliable curtain-closer, which has lost none of its traditional verve and, for my money, remains Rex Nettleford's most iconic creation - fuelled by a mix of warm nostalgia, ritualistic motifs and the rhythmic flourishes of the live musical accompaniment.

Sunday night's culmination of the season - overall, a super blend of colour and power - also made room for a sharp, lively remounting of Clive Thompson's vision of the Don Drummond saga, "Malungu," with the Herculean Kevin Moore cast as the tortured and talented trombonist and Tamarra Noel bringing sass and Latin spice to the role of his tragic muse and lover Margarita. Drummond's life narrative, one characterized by music and a descent into madness, is given a deliriously entertaining spin, with sumptuous period costumes and a bedroom climax that gives fresh meaning to crime of passion.

As it happens, passion is also the lifeblood driving Nettleford's dramatic love triangle "Dialogue for Three" (from 1963), featuring a put-upon blue-clad wife (played by Marisa Benain with heartbreaking delicacy), the feisty other woman (Kerry-Ann Henry in ravishing red) and Marlon Simms effortlessly channelling his inner Don Juan as The Man caught between the two women pining for his attention and affection. It couldn't possibly come any closer to reality. Meantime, alongside Simms' gorgeous reprisal of the one-man spectacle that is Leni Wylliams' "Sweet in the Morning," another Nettleford tour-de-force "Spirits at a Gathering," a sprightly look at faith and fellowship in a communal setting, completed the night's diverse and hugely satisfying package.