A MAN APART: Denzel Washington’s The Equalizer is an action-heavy tour-de-force 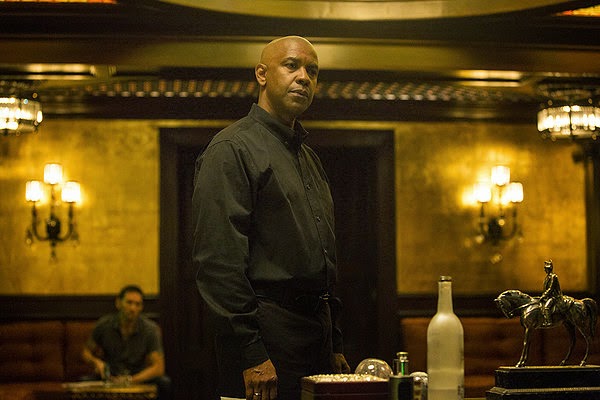 YOU TALKING TO ME?: The gritty new film reteams Washington with Training Day director Antoine Fuqua.

“One day somebody does something to someone, someone you hardly know, and you do something about it because you can.”

That’s the kind of discursive thought process that governs the actions of Robert McCall, the deeply mysterious yet immensely likeable protagonist portrayed with gravitas and characteristically tour-de-force acting by Denzel Washington in The Equalizer, marking a reunion project with Antoine Fuqua, who directed him to an Oscar for Training Day in 2002.

In the end, the movie represents another formidable match-up between the visionary, edgy director and one of Hollywood’s finest leading men who elevates a story of good-versus-evil into an engrossing morality tale. In spite of the film’s length (it runs close to two-and-a-half hours) you can’t look away, and it’s stark testament to Washington’s appeal. Like the best of wines, he only seems to get better with age.

As with such previous one-man adventures as Man on Fire and the more recent Book of Eli, Washington’s McCall is a loner at heart with a past, a mystery man whose incredible self-discipline impresses and whose eccentricities confound. By day, he works at a gigantic haberdashery; every evening he takes his usual seat to eat and read at a local diner. Pretty mundane stuff. But as events start to unfold what emerges before our very eyes is a very dangerous man, one equipped with the lethal combat skills of a trained assassin.

As the opening quote affirms, this is a man intent on fighting for the defenceless, settling scores on their behalf in the tradition of Showtime’s Dexter. So when McCall attempts to save an aspiring young singer Teri (Chloe Grace Moretz) from the clutches of a mob of ultra-Russian gangsters who run an intricate drug and prostitution ring, things heat up, and so does the body count. It’s a development that brings into the picture a ruthless Russian thug named Nicolai (Morton Csokas) sent from Moscow to ‘rectify’ – which sets up a clash royale between our hero and one of the toughest rivals he’s ever encountered.

Needless to say, it all gets very messy. The violence gets Tarantino pulpy and viscerally graphic on occasion – but thankfully it never feels gratuitous. There are also welcome but fleeting appearances by Melissa Leo and Bill Pullman as figures from McCall’s past, not to mention a reasonably solid script from Richard Wenk.

In short, while The Equalizer won’t rank in the top tier of Denzel’s finest cinematic achievements, it certainly stakes its claim as one of his most action-heavy and frenetically paced blockbusters and reaffirms his too-cool-for-school versatility. Tyrone’s Verdict: B+

Email ThisBlogThis!Share to TwitterShare to FacebookShare to Pinterest
Labels: At the Cinema, Current Cinema, Denzel Washington, Flick of the Week, Movie Reviews