ON WITH THE SHOW: Laff It Off's Oliver Mair brings crowd-pleasing instincts to modern theatre 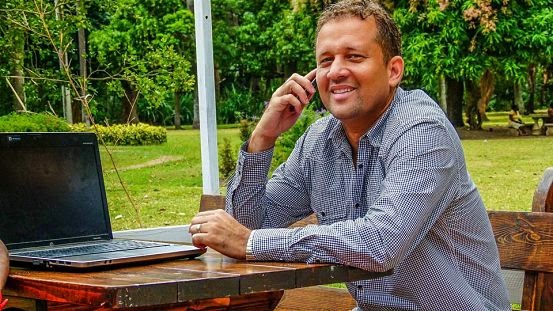 SPEED DIAL: "Once your family is involved in what you're doing your life becomes so much easier," Mair reflects.

Oliver Mair may be a high-powered businessman by day with his fingers in many entrepreneurial pies, but when it comes to his life in modern Jamaican theatre, he has a singular priority: putting on a solid show for the folks who shelled out their hard-earned bucks to fill the seats. With his latest effort, the hit comedy revue Laff It Off, Mair has managed to do just that, orchestrating what TALLAWAH has described as "a hugely entertaining production that fuses boldly original insight and social commentary, deeply humorous satire and unbridled energy."

Previous writing-producing efforts for the 40-odd year-old avid sports man (who declines to reveal his age) have included the debut Rhythm of Life, the Actor Boy-winning Dat Ting (star Chris 'Johnny' Daley won an acting award) and the Ting series of sequels. Now Laff It Off is one of the hottest tickets in town, and one gets the feeling that this respectable track record is only the beginning of great things to come from Mair.

As the show extends its run at the Little Little Theatre, TALLAWAH sits down with the JMTC and UWI Singers alum to talk about his early years, family values, and Jamaican theatre as a work-in-progress.

TALLAWAH: What led you to take up theatre as a creative pursuit?
Oliver Mair: I think it's something I've always had an interest in. While I was at Vaz Prep I did my first show called Samantha and the Seven Doobees. I played one of the doobees. I was supposed to play the prince, but that role went to a youth named Ziggy Marley.

TALLAWAH: Interesting. What was Ziggy Marley like in prep school?
O.M.: He was one year ahead of me, but he was very down-to-earth. All of the Marleys, from my experience, are down-to-earth people.

TALLAWAH: I've read that your family members play very active roles in your theatre life.
O.M.: For me, once your family is involved in what you're doing your life becomes so much easier; there's no tug-o-war. Both my wife and my father are helping out with this production doing ticket sales. It's a very supportive family, and through efforts like these we get to spend more time together. My mom and dad have supported me on every single production I've been involved with since Vaz Prep right up until now.

TALLAWAH: You're so very lucky.
O.M.: I think so, too. It's priceless actually. And I think it makes the challenges of your life's journey that much easier.

TALLAWAH: Apart from family support, what else fuels your inner drive as an entertainer?
O.M.: I love to see and hear people laughing. In school, I was always the class clown, so all my friends and the people who've known me for years aren't surprised by what I'm doing now as an actor and producer because of how I used to be cracking jokes in class all the time.

TALLAWAH: After Laff It off, what happens next?
O.M.: Right now we're just enjoying what is happening and the positive feedback the show's been getting. There are a couple of ideas we're thinking about, and we've had a few offers for overseas travel. Based on the feedback we get from the rest of the run we'll decide where we go next.

TALLAWAH: On reflection, how has Jamaican theatre changed since your first started out all those years ago?
O.M.: From what I've seen, we're still doing good work, and I have to commend people like Jambiz who are certainly the trendsetters in the business. You have to also respect people like Basil Dawkins, Dahlia Harris and David Tulloch for the efforts they're making. You see encouraging signs, but the industry is of such that there's still a lot of work left to be done. The government of Jamaica still needs to do more for the arts, theatre in particular. People want to see productions that make us think, encourage us to laugh at ourselves, and help us grow.