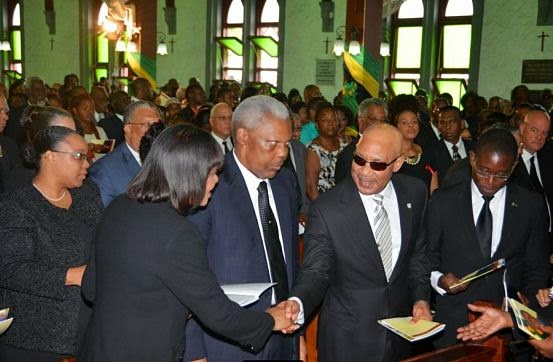 WE WERE THERE: PM Simpson-Miller and Governor General Sir Patrick Allen greeting each other at Saturday's service, as Errald Miller looks on.

Since his untimely passing, the term larger-than-life has been regularly called upon to describe former Jamaican minister of government and Member of Parliament Roger Clarke. So it's only fitting that the speeches that flowed inside St. George's Anglican Church during Saturday's official thanksgiving service for his life and work were on par with that description.

Prime Minister Portia Simpson-Miler was immensely fond of her administration's Agriculture & Fisheries minister, whom she eulogized with trademark respect and from-the-heart candour. "He was a unique friend, a one-of-a-kind and invaluable nation-builder and exceptional servant of the people," the prime minister remarked in her address. "The outpouring of love from across the nation, even across political divides is such that Jamaica has never seen before."

For Simpson-Miller, the approachability and irrepressible joie de vivre Clarke brought to his daily interactions with everyone equally endeared him to people. "He cultivated and nourished and cherished real and lasting friendships on both sides of the parliamentary aisles. He cemented bonds of trust and respect through his fairness. These bonds are unbreakable, even with his passing, and remain lessons for all of us who remain."

As expected, an enormous and diverse mix of mourners packed the Savanna-la-Mar-based church to pay their final respects — a large number of parliamentarians, scores of constituents and PNP delegates, who joined everyone else in comforting the bereaved, particularly Clarke's widow Sonia, daughter Dollette and son Andrew.

As it happened at Sir Howard Cooke's memorial service in Kingston last month, former prime minister P.J. Patterson was on hand to deliver the main remembrance. He, too, drew attention to the impeccable qualities that made Roger Clarke such a class at. "For as large as he was in life, he has proven to be even larger in death," Patterson said of the 74-year-old former Central Westmoreland MP, who drew his last breath on August 28 en route to Jamaica from the United States post-surgery.

"The strong sense of irreparable loss to all Jamaica and the massive outpouring of genuine admiration reflect a crossing of the divide of politics, of social class, of colour and creed. The widespread recognition and esteem of the worth and work of this gentle giant springs from a narrative which stands the bridges of a humble beginning."

> THIS MAN'S WORK: The sudden passing of MP Roger Clarke