TIME TO REFLECT: For Usain Bolt, the key to victory is in the prep and the passion 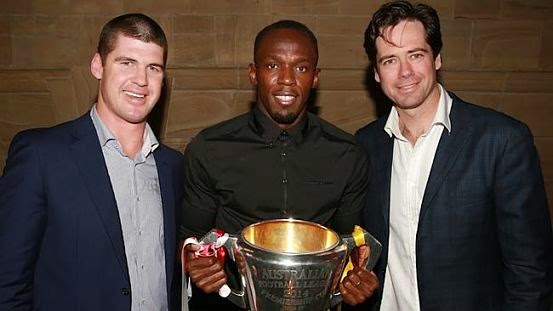 SOLID GOLD: Bolt poses for a picture with the 2014 premiership cup, alongside Jonathan Brown and AFL CEO Gillon McLachlan at the Virgin AFL party in Melbourne on Wednesday night.

In Usain Bolt’s glittering orbit, there’s always time for stylish adventure (the sprint legend is currently in Australia) but in spite of all the globe-trotting, whether for work or leisure, Bolt’s core purpose is never far from his mind.

“I want to be the best; I want to be among he greats – like Muhammad Ali,” the World’s Fastest Man explained, when asked what keeps him going after so many sterling accomplishments (on and off the track) during a lively interview on Channel 9’s Wide World of Sports in Sydney. “I’m really happy that I’ve accomplished so much, and I’d love to accomplish more.”

That said, easily the most anticipated feat for the six-time Olympic gold medallist to perform would amount to a lowering of his own highly coveted 100M (9.58 seconds) and 200M (19.19 seconds) world records – a subject that is never far from the thoughts of track-and-field enthusiasts, journalists included. “Everybody wants to see the 100M go, but the 200M is my personal focus. If I can get a perfect season where I’m working well, without any injuries, no time off, I’ll definitely have a chance to break the 100M world record,” the sprint superstar assured readers, as quoted in a new BBC Sports report. “The 200M is my personal focus.”

The 28-year-old continues, “One of my biggest goals is to try to run sub-19 (seconds). Pushing the barrier a little bit will be great for me.” But what people – scientists even – have long speculated about is just how much faster can history’s fastest man ever really go. “With me, I never try to pinpoint a time,” Bolt admits. “I always try to go out there and run. The first time I broke the world record was just me running.”

Dressed in a crisp white tee and jeans, Bolt helped keep the in-studio vibe refreshingly lighthearted (you can catch clips of the interview here), also dishing on things like his love of cars, his recent trip to India for that sizzling showdown with Yuvraj Singh, and the irrepressible joie de vivre he’s consistently brought to, um, the wide world of sports. “I’m just being me. I go out there, I’m well-prepared and I run,” the sprinter says. “You’ve got to enjoy; you can’t take it too seriously. That’s how I see it. If you don’t enjoy what you do, then don’t do it.”