TRACING HISTORY: Author Olive Senior vividly explores an under-examined piece of the past 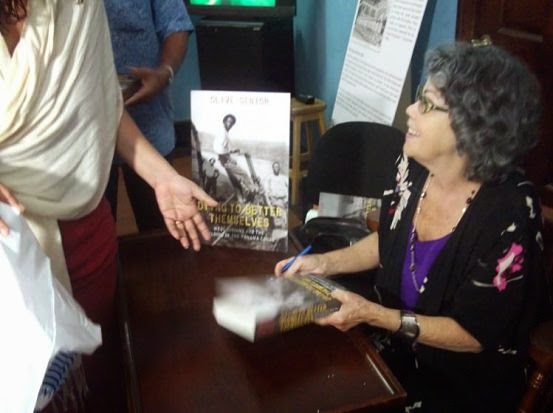 OPEN BOOK: The author signing copies and greeting attendees at Sunday's lecture at the IOJ.

During the Q-&-A segment of the National Library of Jamaica's 5th Distinguished Lecture, hosted by the Institute of Jamaica on Sunday afternoon, a participant took presenter Olive Senior on an unexpected trip down memory lane. "Twenty years ago you told me you were going to write about Panama, and I've been waiting for [the book] ever since," the former colleague recalled. "Why did you want to write about Panama?"

As pleasantly surprised as she was by the encounter, it was precisely the kind of flashback moment Senior needed to put into context the genesis of her new work, Dying to Better Themselves: West Indians and the Building of the Panama Canal (UWI Press). "I chose Panama because I grew up in a household with people who had gone to Panama, including an uncle and my grandfather, who told us stories about their experiences. So I had all of these images imprinted on my mind," Senior told the rapt auditorium. "So at some point I decided that I wanted to know more about what people did there."

Curiosity, as they say, got the better of her and led to wide-ranging research and the eventual completion of a first draft that was put on hold. That was years ago; she wrote 14 other books in the meantime. But on the occasion of the centenary of the construction of the Panama Canal (1914-2014), Senior knew she had to dust off the story so it be could be ready to join the global conversation. "I'm glad I didn't publish that first draft. I think I'm a much better writer now," she admits, laughing. 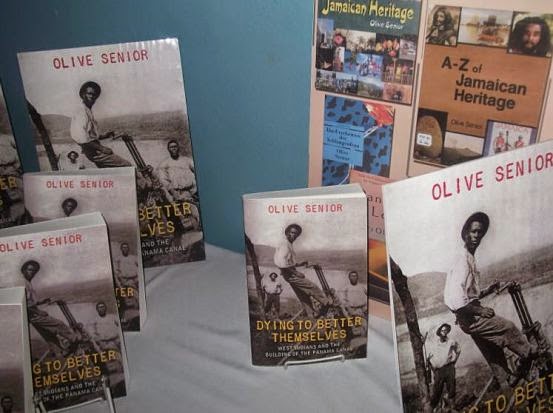 Dying is a thick volume (some 416 pages) which meticulously charts how the myriad individuals touched by the construction of the railroad and the canal changed their Caribbean worlds as well. On a larger scale, this important new historical text examines the neglected post-emancipation generation of the 1850's who were lured to the Central American country, particularly Colón, by the promise of lucrative work and who initiated a pattern of circular migration that would transform our islands economically, socially and politically well into the twentieth century.

At the heart of it all looms the complex figure of the "Colón Man." "Going to Colon became a style, became the iconic image back home and became part of the West Indian epic," Senior emphasized in her lecture, equally drawing attention to such evocative reminders of the experience as the song "Colón Man Ah Come" and the "cargoes of fake jewelry they brought back." As her presentation further attested, Senior believes history has been unfair to poor Colón Man, who is repeatedly treated as a stereotype in everything from folk songs to stories handed down through generations. "I am interested in presenting him as an archetype," Senior says, "one driven by the need to improve his conditions; dying to better himself."

Email ThisBlogThis!Share to TwitterShare to FacebookShare to Pinterest
Labels: Book of the Moment, Buzz on Books, Institute of Jamaica, Lectures, Olive Senior