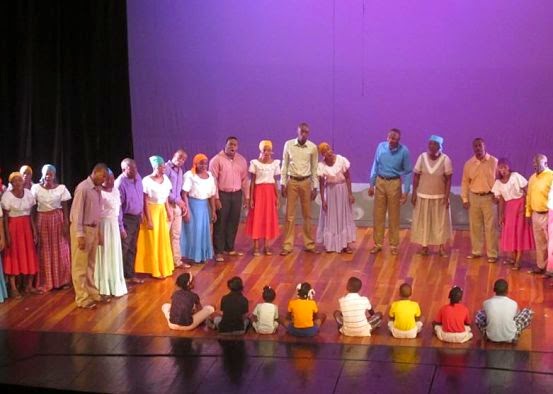 LIFT EVERY VOICE: The weekend-long season showcased a vibrant fusion of talent and tradition.

The mood of the Jamaican Folk Singers 2014 concert season was equal parts festive and reflective, imbued with just the right balance of flair, folkloric storytelling and some fanfare. But easily the most pleasantly surprising thing about the performance, aside from the inclusion of a visually impaired collective, had to be the cleverly choreographed dramatic sequences of the second half that really made the whole show come alive. I didn't know they had it in them.

Divided into two solid halves, the concert featured music that essentially stripped away all lurking artifice to reveal the passion at play behind the repertoire. For those who've closely followed the Singers over the years, you would have no doubt delighted in the quiet and contemplative style brought to renditions of folk gems and spirituals like "It's a Mighty Long Road", "He Lifted Me" and "Lily of the Valley," only to find yourself ascending on the crescendoes of mid-tempo grooves like "Noah Build De Ark," among several others.

Even so, the nearly 40-voice choir is at its best when orchestrating confectionery numbers coated with a pop gloss and tongue-in-cheek riffs on the contours of intimate relationships and other socially sensitive matters. We were pleased to discover, too, that Dr. Olive Lewin's vision is very much alive, as evidenced by the meticulous crafting that went into the overall staging, the harmonious balance of voices and instruments and superb song choices that tell poignant tales and heed to the traditional over the contemporary.

My only quibble is that the presentation ended all too quickly. Still, the choristers (a mix of veterans and relative newcomers) demonstrated an engaging verve in motion, as they accessorized their tunes with sprightly live accompaniment and the movement to match. In short, the concert amounted to an enjoyable evening inside the Little Theatre marked by selections from a timeless repertoire and emphasis on time-honoured tradition.