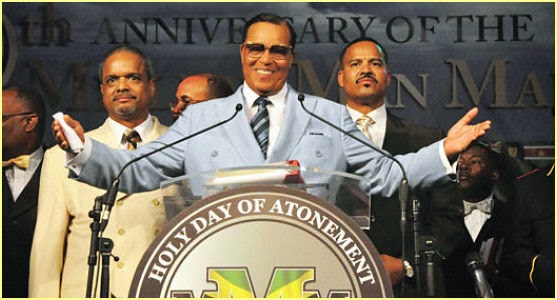 ON MESSAGE: Farrakhan urged Jamaicans to build "an exemplary nation" in the spirit of our national heroes.

"This is a class!" announced Minister Louis Farrakhan, midway his lengthy yet absorbing presentation in Kingston on Sunday afternoon, which drew an unsurprisingly enormous crowd to the National Arena — folks from all walks who came out to hear the Nation of Islam leader's message for Jamaica and the rest of the world on the occasion of the 19th anniversary of the Million Man March.

And he did not disappoint. The 'congregation' enjoyed his presentation immensely. At times jolting and provocative, frequently amusing, but never less than enlightening, Minister Farrakhan didn't mince words as he spoke truth to power, challenging everyone from the British monarchy to the Pope and the Catholic Church. But personally, I liked very much his choice words for modern Jamaica, coming at this juncture of incredible challenge and change in the nation's history.

"You always punch above your weight. I want you to bathe in the sunlight of God and his purpose that we may truly be an island not only in the physical sun but an island bathed in the light of God," urged Farrakhan (whose father is Jamaican), his words delivered with an emotional wallop typical of speakers of his ilk. "Let us become an exemplary nation, an exemplary people that can continue the legacy of the heroes who we will honour [on Heroes' Day]. They have done their work and we are the beneficiaries of what they did. The question is, What are we doing to finish the work because the work is not done."

> "The cultural community is the one that will save the world. Bob Marley proved that one song can change the world."

> "People want strength from their leaders; they want wisdom. You won't get what you don't have the courage to demand."

> "Independence, you don't have that yet! [Jamaica is] still under the British rule. I think that's a problem. You have not proven in the 50 years that you are not still bound to your former colonial masters. Don't you think you can handle your own affairs? That's what Independence means.

> "I came to give back to the island that gave so much to me. You are a prize, Jamaica. I have come here with love for you. I can never repay the Caribbean for what the Caribbean has done for me."