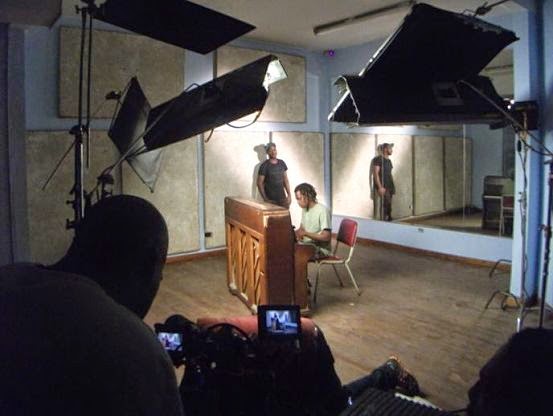 In a dimly lit room at the Edna Manley College, Kumar Bent leans against the wall and acknowledges the reflection in the mirror staring back at him, as he belts out the plaintive lyrics to "Brave," the second single off his band Raging Fyah's sophomore album, Destiny, on sale now. "Let's feel the soul in it," director Kyle Chin tells him, and Bent takes the advice to heart, filling the words with such impassioned earnestness that a hush falls over the room. Welcome to the set of the video shoot for "Brave," a wised-up piano-driven tune teeming with humanity, passion and pain that speaks to the kind of heart-and-mind concerns driving this conscious band's universal outlook.

"I actually wrote this song for my mother, who is a very spiritual, church-going woman," Bent, the group's dreadlocked lead singer, tells TALLAWAH. "I think she'd appreciate hearing it." We couldn't agree more. And that goes for the rest of the 11-track album (a follow-up to the acclaimed debut Judgement Day) that offers a channel-surfing of genres, moods and tempos, spanning traditional-meets-modern reggae, sublime roots rock and a sprinkling of Caribbean flavour.

In one crucial respect, the "Brave" shoot symbolizes a homecoming of sorts for the bandmates who met right here on campus while pursuing undergraduate studies in music and performance art. That was over a decade ago. In the interim, Anthony Watson, Demar Gayle, Delroy Hamilton, Andre Dennis and Bent joined forces with elder statesman Courtland 'Gizmo' Whyte to formalize the group, which went on to release Judgement Day (in 2011), a game-changer that more or less catapulted them from underground sensation into the mainstream public consciousness. They've been capturing hearts and wooing radio disc jocks ever since. They've toured extensively, too, amassing a large following in the States and across Europe.

"Apart from being a band, we're brothers. We share jokes, man get vex, but nobody takes it personal. It's a natural chemistry," keyboardist Dennis says of the fraternal camaraderie that holds the unit together like glue. And with the exception of one band member they are all fathers in their late 20s and early 30s. "It's a legacy thing for us," Dennis points out. "We are passing it on to the next generation because this kind of music is needed."

Artistically, Raging Fyah combines a rhythmic potency akin to the Wailers with the hard-hitting lyricism of a Third World to create a spellbinding sound entirely their own. Then there's that name which, more than anything, attests to their collective strength of character. "It's a very strong name, so we have a lot to live up to," Dennis notes. "Raging Fyah can't cool, so we have to keep this going until our children take it over." Bent readily agrees. "We're coming from far," he says, "and we have a very far way to go."