MAN OF THE MOMENT: How theatre's David Tulloch is staying ahead of the pack 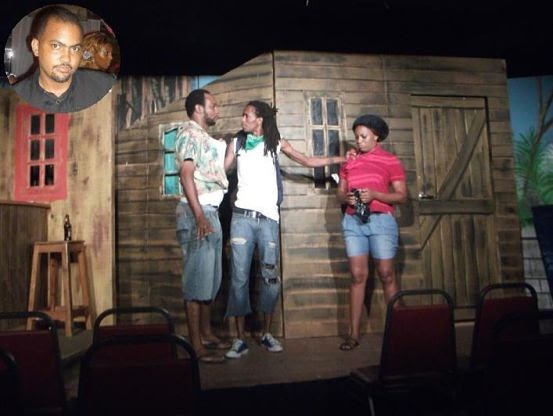 MAKING A SCENE: Junior Williams, Marlon Brown and Dainty Bellanfantie in an intense moment from Tulloch's The Prophet. Inset, the playwright.

"I have four projects working on right now," David Tulloch declares to TALLAWAH, quite animatedly, one recent evening while standing in the parking lot of the Green Gables Theatre, dressed in a crisp white tee next to his crisp white whip, following a rehearsal for Lady Rennae's Jamaica Mek Wi Laugh. The upcoming ensemble comedy revue, premiering October 10 at the theatre, marks a rare collaboration for Tulloch as director with another writer, given the fantastic regularity with which he brings his own work to the stage.

To wit, this year alone records the debut of the acclaimed domestic drama For My Daughter and October's bounty of The Prophet, Mek Wi Laugh, a revival of Confessions, and Sins of the Flesh, which is set for month's end. But if you thought that was all think again. December brings the hotly anticipated mother of all sequels Bashment Granny 3, starring Keith 'Shebada' Ramsey and the gang, while Heart Attack is tentatively scheduled for January 2015.

David's productivity du jour is all the more remarkable, especially when one considers that outside the theatre he leads a very full life, one which more or less translates to a full plate. In addition to a day job all the way in Montego Bay, he has a wife and bouncing new baby boy, Joshua, at home — not to mention a raft of other familial responsibilities all vying for his attention.

To say the least, it's a supreme balancing act he's performing, which he gamely tackles while handling himself with the utmost finesse. But where he clearly puts himself to the best use is in crafting the kind of entertaining and thought-provoking stories that don't get told enough to Jamaican audiences.

For me, I think this relentlessness serves to underscore the fact that this is a new-generation storyteller (still in his 30s) with something meaningful to say, who is intent on contributing memorably to Jamaica's theatre culture while staying true to himself and his way of seeing. And given his tendency to surprise theatregoers, rest assured we haven't seen the best of him yet.