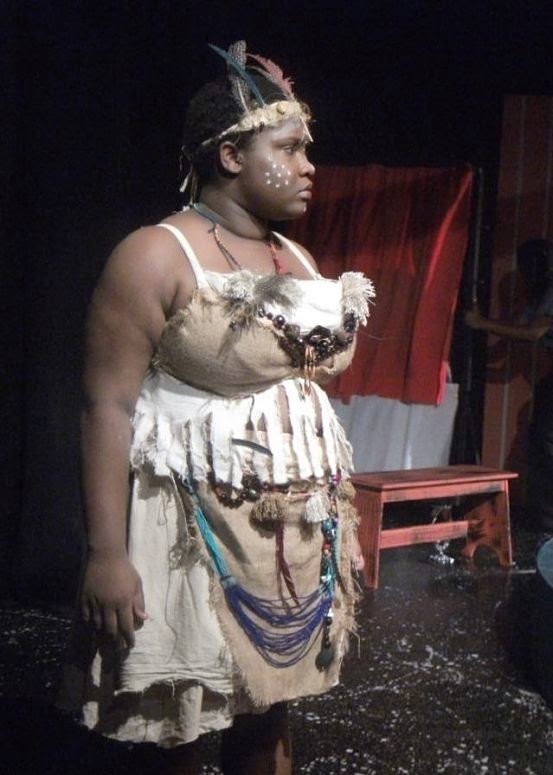 AIN'T I A WOMAN? Eden Gibson in a star-making turn as the Venus Hottentot. Below,  another scene from the play.

If there's one thing audiences love more than spectacle it's scandal. You get healthy servings of both in Venus, the School of Drama's latest theatrical offering based on the acclaimed play by Suzan-Lori Parks, who created history in 2002 when she became the first Black woman to win a Pulitzer Prize for Drama (for Topdog/Underdog).

Alongside the scandal, the spectacle and the occasional show-stopping sizzle, it's history of different stripe that plays out in Venus, which spins the based-on-real-life-events story of Sarah Saartjie Baartman, who is 1810 is practically kidnapped from her native South Africa and taken to London (and later Paris) to be showcased as an oddity. You see, Venus (later branded the Venus Hottentot) is no ordinary girl, blessed as she is with an enormously plump derriere that demands more than a double take. It's quite an asset. As Mother Showman (a superb Samantha Thompson), who runs the "freak show" where men come to view and ogle Venus for a fee, points out, "You are a native Negro with a remarkable spanker they pay to see."

As one can imagine, it takes immeasurable willpower and courage for Venus (played with splendid conviction by Eden Gibson) to maintain her sense of dignity in the face of the physical abuse and mental anguish heaped on her. But at her core, Venus proves she's more goddess than doormat, and this becomes especially obvious when she encounters and is seduced by The Baron Docteur/The Man (Shamar Bruce) who offers to rescue her from her terrible fate. But can he ultimately save her from herself? In any case, it's a serious case of "the kindness of strangers" that we witness, and it's a perfect plot point that Lori-Parks drives home loud and clear. 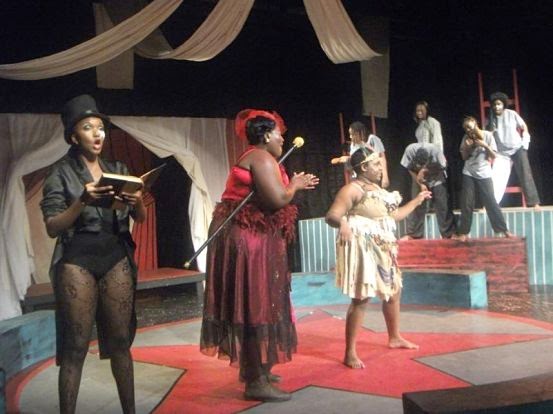 A fantastic storyteller with a flair for the dramatic, humour and satire, the playwright succeeds in fashioning a hugely entertaining piece of writing for the theatre (and history class) out of Sarah's tragic true story — imbued with a sense of empathy and respect for what she went through as girl who is robbed of her innocence just as she was discovering that it's hers to lose. Venus also boasts a solid narrative framework, fair lighting and a decent set, but the play's overarching carnival motif becomes a tad tedious after a while.

Still, director Alude Mahali manages to give this eye-opening tale a deft rendering, eliciting committed performances from the leads (kudos to Thompson and Danielle Jones as the Negro Resurrectionist) and chorus members. As the beleaguered Venus, Gibson proves she's a gem-in-the-making, rendering her monologues with emotional precision — even when delivering impossible lines like, "To hide your shame is evil. I show mine. Want to see?" Tyrone's Verdict: B+