PRIME SUSPECT: Suspenseful and smart, Gone Girl is one of the year's best thrillers 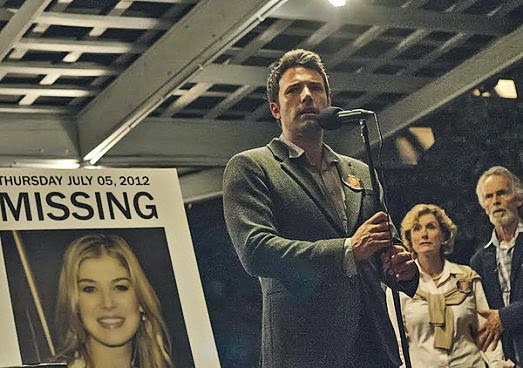 AN INNOCENT MAN? Affleck stars as a husband implicated in the startling disappearance of his wife of five years.

On the surface, lovebirds Nick Dunne and Amy Elliott Dunne seem like the perfect match. Attractive, wildly intellectual, and extravagantly wealthy with pedigree bloodlines between them, they are the pair who have it all. Nick is the dreamboat creative-writing teacher and journalist, the Harvard-educated "Amazing Amy" is just as, if not more accomplished, with doting parents and close friends who can't brag about her enough. What we see is a blissful marital union. Soul-mates.

But on their fifth wedding anniversary things take a bizarre turn when Amy vanishes without a trace from their matrimonial home, and before long Nick emerges as the prime suspect in the disappearance case. The police investigation grows feverishly intense and a media circus plays out during which Nick is virtually picked apart like cotton and hung out to dry.

But, as we soon discover, nothing is what it seems, and Amy's foreboding voice-overs, diary entries and flashback storytelling take on disturbing resonance. "This man may kill me," she tells us. For his part, Nick vehemently denies any wrongdoing. So who should we believe? Intense and intriguing to a fault, the story hooks you with its razor-sharp claws and doesn't let go till the shattering conclusion.

Based on Gillian Flynn's bestselling novel, Gone Girl makes the leap to the big screen as a taut, well-wrought psychological thriller that brings out superb performances from actors Ben Affleck and Rosamund Pike in the lead roles. It's a David Fincher (The Girl With the Dragon Tattoo, The Social Network) project, so small wonder that he takes Flynn's insanely brilliant script and fashions a mesmerizing work of nerve-wracking suspense, infused with his trademark mix of subtle and dark wit, intelligence and twistily good surprises.

Clocking in at nearly two-and-a-half hours (the time flies by), Gone Girl more than lives up to the hype as the must-see film of the season. With spooky thrills and an atmospheric score - not to mention a plot that thickens with each mind-bending revelation - this is David Fincher at his masterful best. Tyrone's Verdict: A-

Email ThisBlogThis!Share to TwitterShare to FacebookShare to Pinterest
Labels: At The Movies, Ben Affleck, Current Cinema, David Fincher, Flick of the Week