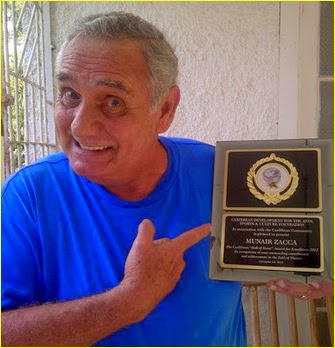 INTO THE BLUE: "You have to exercise more care," says a health-conscious Zacca, with Cunningham below in Lotto Money.

Turning 70 next year, Munair Zacca has a singular wish: to stay consistent in an acting career that keeps rewarding him with surprising artistic epiphanies and gratifying roles. From theatre to television to the big screen, this is an actor's actor who has brought to life some truly fascinating characters over the years — none more memorable than Royal Palm Estate's resident sophisticated thug Sonny Tavares. (Trust, we haven't seen the last of him!) And the parts keep on coming. This month has brought the side-splitting three-hander stage comedy Lotto Money (with Dorothy Cunningham and Peter Heslop) and a return to film for Jeremy Whittaker's buzzy new flick Destiny. TALLAWAH catches up with an iconic Jamaican actor for all seasons.

TALLAWAH: We heard that you recently waged a hard-fought battle against chikungunya and won. Welcome to the club. What was it like for you coping with the illness?
Munair Zacca: You're in constant pain from your head to your toe, and you have absolutely no energy. All you can do is take medication to ease the headache and the muscle and joint pain. And you really run a temperature.

TALLAWAH: Would you say you're giving greater consideration to your health and well-being now that you're a man of a certain age?
M.Z.: Yes, because as you get older more things tend to go wrong, and you have to ensure that you don't expose yourself to things as readily as you did when you were younger, when your resistance was stronger. You have to exercise more care.

TALLAWAH: What did you make of the government's efforts in responding to the chik-V crisis?
M.Z.: I think it's atrocious. They let it get out of hand while they were trying to cover up that it wasn't as serious. I don't know where that figure came from, but I heard that ninety percent of the population is expected to come down with [the illness].

TALLAWAH: The Blackburns of Royal Palm Estate is due back on the small screen for another season. What's Sonny T's deal this time around?
M.Z.: As you know he'd gotten on board this ship, a Venezuelan freighter, after escaping from Inspector Madden (Bobby Smith). They pulled him aboard and helped him, but they turned around and held him hostage to the tune of $500,000. So in upcoming season he's going to get the money to pay them the ransom, but we haven't shot those scenes yet. 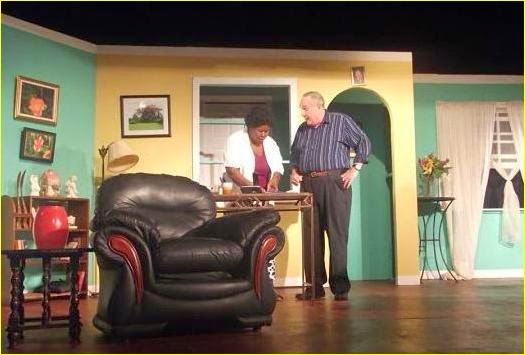 TALLAWAH: As a actor, is it a more fun challenge to play a villain like Sonny T as opposed to a Mr. Nice Guy type?
M.Z.: I'd say yes. Villains are more interesting to an audience than a good guy. Sonny T is a very popular guy with the public because they like to see a bad guy operate. (Laughs).

TALLAWAH: You play a high-powered lawyer in the new Jamaican film Destiny. How did the script find its way to you?
M.Z.: The director-producer of Destiny had worked with us on Shottas as a production assistant, and he remembered me from then. So he approached me saying he thought this was another role I could play. I also have a role in that movie Kingston Paradise by Mary Wells, but the one in Destiny is a far more substantial role.

TALLAWAH: What were you afraid of as a kid?
M.Z.: Ah, that's a tough one. I never liked Sundays as a kid; they always seemed so mournful to me. But you can't say I was fearful of Sundays. I was always afraid of heights. If I went up into a very high building and looked out the window, I felt like I was going to fall out. Funnily enough, in an airplane I never felt afraid; I felt secure because I knew I couldn't drop out. High buildings, on the other hand, are a totally different story.