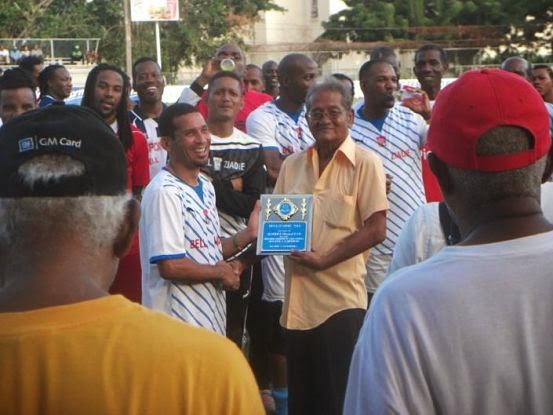 ON THE BALL: Lyn (right) being presented with his award at the 2014 Bell/Ziadie Memorial. Below, action from the field.

In recent times, the organizers of the long-running and annual Bell/Ziadie Memorial football fiesta have a made a point of honouring notable figures who've made immense contributions to the growth and development of football as a national sport. This year they couldn't have honoured a man more deserving than Danny Lyn, the legendary sportsman whose name is practically synonymous with the Constant Spring football mini-stadium and the namesake club that has been a fixture in the local leagues for ages.

By his own admission, for Lyn it's always a pleasure being acknowledged by his peers for the strides he's made and to be cited among the all-time greats of Jamaican football. But the Heroes' Day occasion at Winchester Park held special significance for him, in that it was a chance to share anew in the memory and legacy of Dennis Ziadie and Winston 'Jackie' Bell — and reflect on his journey with the late stalwarts. 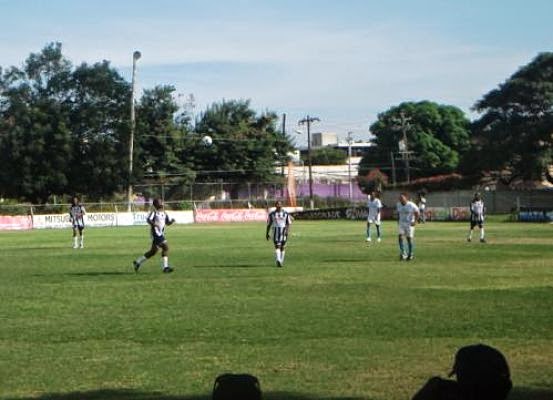 "I knew both players very well, and we did great together. Jackie was actually a coach of mine at one point, and I know the entire Bell family," Lyn tells TALLAWAH, as the fiesta teams (a mix of veterans, sponsors and celebrities) prepare to take the field for another match-up. "So it feels good to be recognized [by this event] as an old boy, for one, and as someone who has helped develop the sport in Jamaica."

At 67, Lyn is still going strong — even spearheading expansion plans at Constant Spring (currently in "rebuilding" mode) and seeing to the upgrading of the mini-stadium. "I'm glad to still be active and looking to the future," he concedes, adding, "I will continue to help the sport for as long as I can. It's a passion of mine, and as far as I am concerned, [football] will always be around, and I'd like to be a part of it."