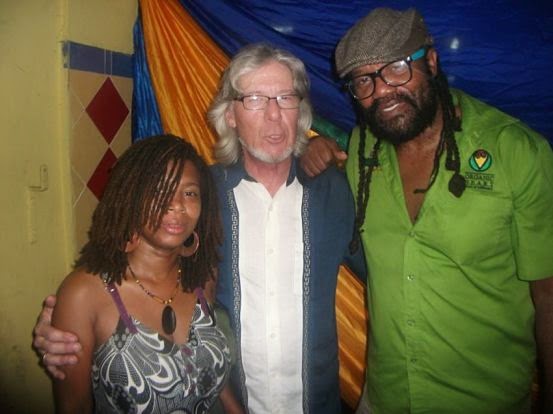 DOING GOOD: Herrin (centre), with publicist Isha Bel and Tony Rebel at The Essence in Kingston.

A few summers ago Burt Herrin made his first trip to Jamaica, and life for the Texas-born missionary would never be the same. "When I was working in the churches in some of the poorer parts of Kingston, I came across these young boys who were so well-behaved, so honourable to their parents that it amazed me," he recalls. "They can't help it that they can't get a good job and take better care of themselves, but they had hope and integrity. And so my team and I decided that we were going to do something to help."

Born out of that feverish desire to make a difference, Herrin's Fed Up With Hunger initiative is poised to impact the lives of not only underprivileged youths in the capital but also those of young Jamaicans with similar stories elsehwere on the island. Though the initiative is still at the toddler stage, one senses a genuine commitment to see it evolve into something extraordinarily successful. "We want to be an avenue for change, a source," Herrin insists. "I have an army waiting to help." Add to that endorsements from Central Clarendon MP Mike Henry, Rebel Salute's Tony Rebel, Tuff Gong International, among others.

Amelioration work at a small school in Bog Walk (to be equipped with bathroom facilities, kitchen supplies and educational DVDs) will get the ball rolling in the coming months. "My daughters are teachers, so we're going to bring supplies from the United States to distribute to the young kids, the poor and the needy," explains Herrin, whose son-in-law and grandkids are Jamaican.

A self-professed "sparkplug" with silvery gray hair, a heart of gold and deep musical roots, Herrin credits Bob Marley as an early influence. "I had seen a documentary for two-and-a-half hours, and I was profoundly affected by it," recalls the multifaceted do-gooder, presently in his sixties, who sings and plays guitar. "I didn't know I was coming to Jamaica then. I never thought in my wildest dreams that I'd ever be in Jamaica."

This past Tuesday night, Herrin (backed by his Global Warming Band) launched his album Lightning Bolt, a titular nod to the sprinting legend, at The Essence in Kingston. It's a commanding blend of sounds, spanning reggae, rock and world beat. Proceeds from sales of the record will benefit his charity work locally. "God is in this movement or a Spirit much stronger than I am," Herrin concedes, his voice spiked with anticipation. "So many people have come on board. I'm overwhelmed."

> GET INVOLVED: To learn more about Burt Herrin's cause and to pledge your support, contact him at burtherrin@gmail.com.