HER OWN CREATIONS: Designing costumes for pantomime keeps Anya Gloudon-Nelson on her toes 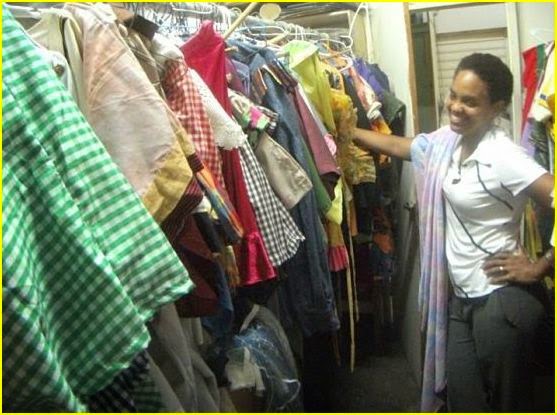 ON THE RACKS: The wardrobe mistress strikes a pose among some of her designs at LTM headquarters.

For Anya Gloudon-Nelson, the most rewarding part of producing the costumes for the annual LTM pantomime comes during showtime when the occasional audience member elicits a Wooh! as one of her designs steals the spotlight. Or when a camera-phone stealthily emerges to snap a quick pic of a particular look. According to the veteran seamstress, now 41, nothing quite compares to the final product being appreciated. But Anya will be the first to tell you that the creative process of getting to to that exhilarating high demands challenging, painstaking work.

On a cool Tuesday afternoon at the Kingston-based LTM headquarters (situated on the Little Theatre complex), Gloudon-Nelson is giving TALLAWAH a grand tour of the facilities - the sewing room, the jam-packed storage areas, the props cabinets etc. — where season after season, working with a team of three, she makes the magic happen. "Evey year has its challenges, and right now I feel like I'm late," she admits with a laugh. "This kind of work takes up a whole lot of your life because we start around September and we take them through the workshops straight up to the opening. And the pantomime runs up to May, and then we have the summer show to do. So you're constantly in work mode."

Even so, getting to collaborate on the annual productions has become one of the most meaningful aspects of her life. "The good thing is I'm doing what I love," she readily concedes.

An Edna Manley College-trained graphic artist, Gloudon-Nelson, on the invitation of her mom-mentor Barbara Gloudon, took over the pantomime's costume design duties at the dawn of the nineties when her predecessor Paul Hamilton departed the Pantomime Company. Her first production was 1991's Man Deh Yah, which was no so much a baptism of fire than a case of being tossed into the deep end of the pool and forced to swim or sink. The expected challenges notwithstanding, Anya has been rising to the occasion ever since, winning two Actor Boy Awards for Best Costume Design (for 2002's Miss Annie and 2009's Pirate Jack.)

As she explains, the recognition from her industry peers is always welcome but it's never about the physical accolades. What she prizes above all else are the experience, the Company camaraderie and the fun aspects of the job. Then there's the relationship with her mom that continues to deepen in amazing ways. "One of the best things about working with Mrs. G is learning that you are never truly finished; you can always do better, adjustments can always be made," she reflects, noting that they share artistic feedback and have their (hysterically funny) quarrels every now and again like all mother-daughter pairs.

While on the subject of family, I ask is she's at all bothered by the talk that she got the costume design gig primarily on account of being Barbara Gloudon's daughter. "They might say that, but I am not bothered by it. What makes me happy is when people come up to me and express how pleased they are with the work. The quality of my work will always speak for itself," she says. According to Anya, she's more than earned her place in the LTM fold. "As a member of the team I will go the extra mile," she insists. "If money is tight I know how to work around that. I consider myself an asset to the LTM."

Anya Gloudon-Nelson is showing me some of her design ideas for the 2014/15 pantomime, Princess Boonoonoonoos. As she displays the rough pencil sketches on white paper, she recalls with a laugh how her team members are constantly teasing her that her hand-drawn characters are always faceless. "It's not about the faces; it's about the clothes," she counters in her own defence. This year's pantomime features a cast of over 20 performers and each has at least three costume changes to make. So you're looking at over 100 pieces for this year's show, in addition to accessories and the occasional pieces of embellishment.

As in years past, Anya has her work cut out for her. Thankfully, her highly reliable and productive team go a long way in making the burden bearable. Mavis Williams has been a behind-the-scenes fixture at the LTM since the 1980s, Opal Miller has contributed to some 20-odd productions over the years, and Ewan 'Brains' Harvey is the resident tailor, who regularly pulls double duty as the chef. "We work very well together as a team," Anya conceded. "They are some of the greatest people in the world because sometimes there are things you ask them to do, out of the ordinary, and they don't hesitate. So I am extremely grateful to have them to work with."

Anya Gloudon-Nelson is not a fashion designer; she's a "watcher." "I will walk along Orange Street and watch how people are dressed, how the women mix styles and patterns, and things that I pick up on will eventually inspire me in my creative process," she explains of her research technique. "I watch body language, the lengths of the skirts, and I apply it to the designing. For me, it's more about character than fashion, as applied to the process of design."

And variety is key, whether she's crafting clothes for peasant or prince. Audiences will get to see her take on both worlds when Princess Boonoonoonoos commences previews on December 26, in what promises to be a rollicking and uniquely Jamaican musical comedy about country living versus the royal uptown treatment. With opening night less than a month away, it's crunch time at the LTM, and rehearsals are well underway.

At her age, Anya is used to the pressure of having to deliver and raise the bar each time. As one can imagine, she's gleaned countless life lessons over the years. As if reading my mind, she discloses that the greatest lesson she's learned on the job has to do with outfitting actors cast in the roles of politicians. "Be careful of the colours you choose," she tells me. "Whenever I'm designing a costume for a Jamaican politician, it's either in blue or peach."