SO MUCH THINGS TO SAY: Redbones' Poetry Awards bash turns 14 on a lyrical high 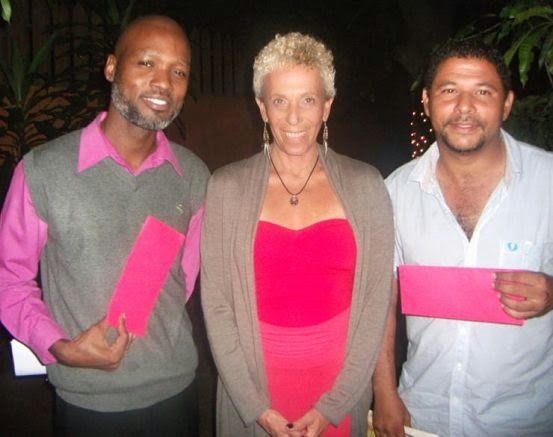 In the end, seasoned wordsmith Nicholas Alexander, a 38-year-old educator whose work has been featured in The Caribbean Writer and other notable publications, came out on top, with second place going to Everard 'Esquire' Smith and third-place honours falling to triple-threat mixed-media artist, painter and poetess Nancy 'Inansi' Burke. They were each presented with attractive small prizes.

Whether capturing hope, humanity or the socio-economic status quo through keenly observant lyrics and tasteful verse, the performers kept the crowd engaged with stirring, controversial, lively presentations often buoyed by self-assured delivery. A fun-loving type with commanding stage presence, Smith was particularly outstanding, so it didn't come as a surprise that he took home the coveted Poem of the Year award, for his humorous, rapid-fire piece "Time," which met with thunderous applause.

Who are these poets? According to event conceptualizer and Red Bones proprietor Evan Williams, himself an ardent devotee of the written and spoken word, the bunch primarily consists of artists who, over the course of the past ten months, had been invited to recite at various Redbones events. Brought together now to face-off in a kind of poetry slam, the septet was judged on a criteria spanning content and originality, performance style and overall presentation.

As Williams went on to explain, the Poetry Awards was conceived over a decade ago, emerging out of his love for verse. It has since bloomed into something the Redbones family avidly anticipates each year, as it brings a flavourful, lyric cafe vibe to the place known for its easy-breezy ambience.

While Williams didn't go into details regarding the event's next chapter or its impact, he's content that the  awards add something meaningful to Kingston's arts scene and boasts an esteemed alumni that includes the Forward Prize-winning Kei Miller, the inaugural first-place winner. "The awards have certainly become a staple on our yearly calendar," Williams says. "It is still a very young event, so we expect it to grow into something bigger as time goes on."