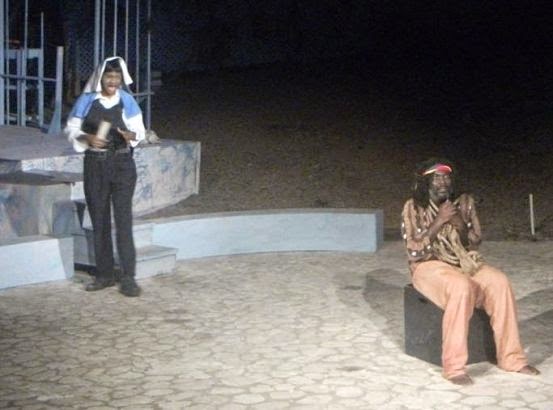 SIGNS AND WONDERS: McFarlane (foreground) and Taylor in character. Below, actors in a scene of revelry.

Nobel Laureate Derek Walcott's oeuvre comprises some of the most captivating and intense dramatic narratives in the canon of West Indian literature, perhaps none more compelling than the classic Dream on Monkey Mountain, which is currently thrilling audiences inside the School of Drama's ampitheatre. Despite some questionable creative liberties with the source material, it's a sprawling and very well-made show, thanks in no small part to the creative team's resourcefulness, Trevor Nairne's sure-handed direction, and a magnetic central performance by Chris McFarlane as the complex protagonist Makak the dreamer.

"I am 60 years old, and I spend my life in hiding, and people forget me like the mist up her on Monkey Mountain. It's 30 years now I don't look in a mirror," the Rastafarian recluse tells his pal Moustique (DuVaughn Burke) one evening outside their shack up in the hills. "I going mad, Moustique." Moustique's droll response: "Well, you better go mad tomorrow; today is market day."

By burning and selling charcoal, they've managed to survive year after year, but when Makak starts prophesying of signs and wonders, declaring himself God's messenger among men — and a direct descendant of African royalty — it comes as no surprise that he is eventually imprisoned and hauled before the courts. In the end we're left to ponder: Was Makak truly something of a natural mystic or just a crazy old coot plagued by unceasing delusions? 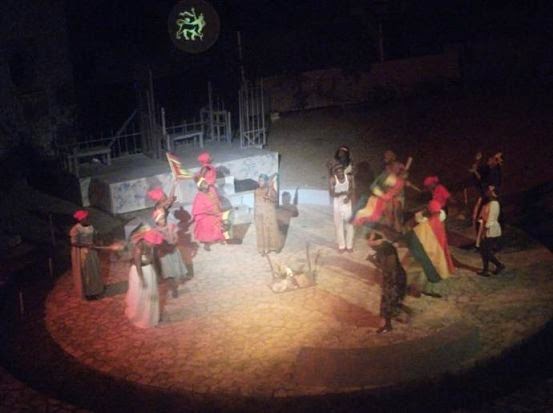 The union of ambition and creative imagination poured into this staging of the Walcott classic (branded a Rastafarian meditation) deserves kudos and goes a long way in helping to secure the production among the year's best productions.

Leading the cast, McFarlane is simply a marvel, hitting the right notes as he captures Makak's idiosyncrasies and firebrand outlook on this circus called life. The key supporting roles — ball-busting Corporal Lestrade (the superb Alicia Taylor), the criminal duo of Rat (Burke) and Tiger (Janeil Stewart); Basil, the skull man (Romaine Pottinger) and Juette Carty as the dancer/apparition in Makak's weird dreams — get filled by talented student actors whose fervour only serve to heighten the appeal of the performances.

Technically, we get a respectable mix of mood lighting, sensible props, intermittent sound effects and a musical score featuring reggae, folk gems and live drumming. It goes without saying, though, that it is Walcott's out-of-the-world vision that fuels this expansive dreamscape, plunging us into a wild kingdom brimming with the tensions and desperations of natives restricted by poverty and trapped by village life. Tyrone's Verdict: B+