WOMAN OF HER WORD: Author Pamela Mordecai readies her first novel, reflects on the literary life 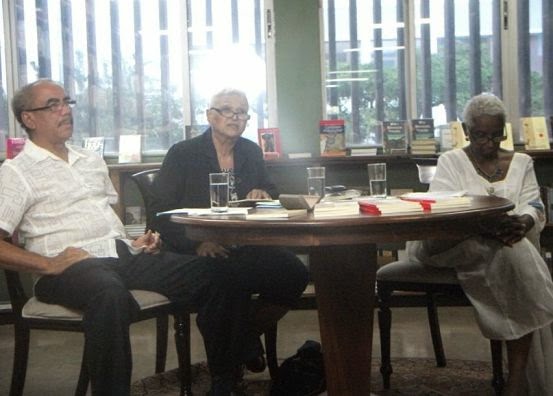 Pamela Mordecai may be regarded across the globe as the legendary author of some of the most wistful stories for kids, informative classroom texts and evocative poetry that dually enlighten and mesmerize, but her writing reveals yet another dimension in Subversive Sonnets, her newest collection of poems which, as the book's title suggests, daringly toys with convention and goes against the grain in exploring everything from relationship dynamics and slavery to domestic strife and other big universal themes.

"I admire what she does with language; how she uses the vernacular and slips effortlessly from one register to another," observes poetess Millicent Graham in an interview with TALLAWAH. "She writes about everyday things, but the perspective she brings to it is just so illuminating."

Subversive Sonnets is indeed revelatory and finds Mordecai in candid, no-holds-barred form. Originally released in 2012, Sonnets got its Jamaican launch on Saturday afternoon inside New Kingston's Bookland, where Dr. Earl McKenzie and Jean Small read selections from the collection, and the likes of Prof. Eddie Baugh and Dr. Velma Pollard sat in the audience, which swelled as the event progressed.

Raised by Catholic nuns in Kingston, where she attended Alpha Academy before heading off to North America's Newton College, Mordecai now divides her time between Jamaican and her adopted Canada, where she is as celebrated as that other Jamaican literary queen Lorna Goodison. But where Goodison has spent the greater part of her illustrious writing life chronicling our evolving history through poetry and short stories, Mordecai's forte has always lain in children's literature. To wit, her next anthology — Roots, Rhythms and Rhymes — is a collection of some 100 poems for children. The manuscript is complete, she tells TALLAWAH, and she's presently seeking a publisher.

Explaining her approach to writing for younger readers, she notes, "There has to be a balance. I will write serious poems and stories for children, but I'm going to write funny ones as well. Literature is supposed to help us with life; to understand it better and to remember that for everything there is a season."

For all her accomplishments in the fields of academics, West Indian lit, and education (she's taught at Camperdown High and the Mico College), Mordecai is still experiencing career firsts — on the cusp of age 73. Red Jacket (Thomas Allen Publishers), her very first novel, comes out next February. Set on the fictitious Caribbean isle of St. Criss, the story nods to Toni Morrison's The Bluest Eye regarding how race, class and colour continue to influence human relationships everywhere — and a little girl's enduring struggle to love herself.

"In Jamaica, shade is such a touchy subject. People are really conscious of that," Mordecai says. "But it's something that needs to be discussed. I started working on this book around 2001, and I'm hoping it will contribute something very meaningful to the conversation."

> NEXT TIME: Mordecai riffs on her health and the power of the Jamaican creole