BAND ON THE RISE: Acapella sensations Avodah hit all the right notes 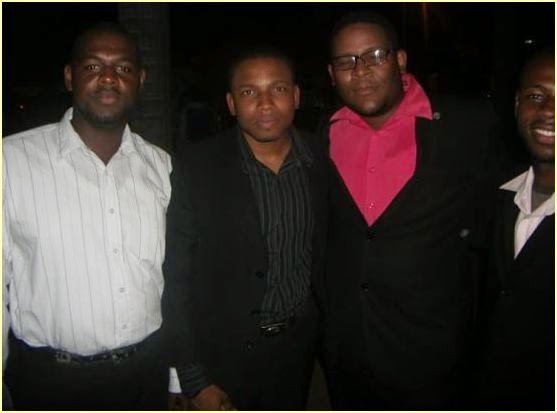 GROUP DYNAMICS: The bandmates hanging backstage after rocking the crowd at Sunday's concert.

Their name means "service" in Hebrew and their motto is "Service to God." Meet the gentlemen of Avodah, an all-male singing quartet whose tight, out-of-this-world harmonies and thrilling stagecraft make them a delight to catch in live performance.

The group's latest stint came at Sunday's Sagicor Praise inside the Emancipation Park, where their show-stopping 10-minute renditions of classic Negro spirituals (like "I Shall Wear a Crown") earned deafening cheers and an encore. Other noteworthy up-and-comers won over the crowd, but by and large Avodah made the most lingering impression.

Currently in their 20s and 30s, the fellas ― Jason Wright, Orane Richards, Troy Miller and Andre Forbes ― are lifelong church boys who currently attend the Old Harbour Seventh Day Adventist in St. Catherine. According to the bandmates, it's been well over a decade that they've been thrilling audiences at home and overseas. And it shows, given the creamy tenor-baritone fusion they bring to the stage. "We rehearse every week, and that basically keeps our sound in check," Wright says of the secret behind the group's pitch-perfect timbre, adding that they look up to such iconic forerunners as Acapella and the Gaither Vocal Band.

As it happens, they haven't done much studio recording since the group's inception, but the three singles they have done ― including the melodic original "Be My Guide" ― can be enjoyed via YouTube. "We like to perform both originals and covers because that allows us to give our fans a mix of our different styles," says Wright. "But for the future, we definitely want to do more originals and maybe an album in a few years' time."

So far the group's gradually flourishing ministry has taken them to events across Jamaica, and in 2011 they made a successful tour of the Cayman Islands. For Avodah, this is only the beginning. "Ultimately, our aim is to spread the message of God across the world," they concur. "We hope to make our mark in a major way."

Email ThisBlogThis!Share to TwitterShare to FacebookShare to Pinterest
Labels: Bands, I'm With The Band, Music Mix, Ones To Watch, The Gospel Scene