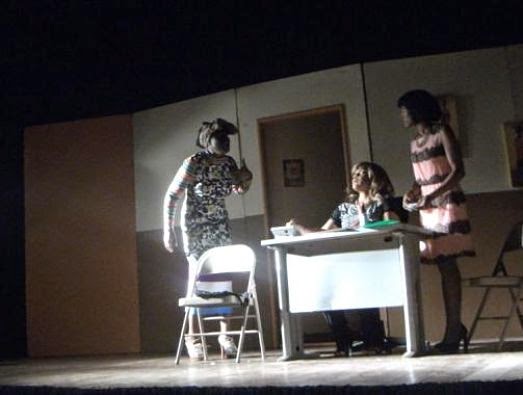 Is this the end for Delcita? The comedy queenpin may be on her last lap in Jamaican theatre, by her own admission, but she's bringing the curtains down on a stellar career with Miss Elsayda, a production brimming with her signature blend of hilarity, thought-provoking takes on parenthood and marital strife, and a bold riff on the socio-economic status quo in Jamaica.

It's a solid show overall, though the lighting and set design leave a lot to be desired and the sound emerging from the speakers (at least at Stephanie Hall where we did our review) is occasionally jarring. Still, Miss Elsayda packs enough punchlines, funny dialogue and sobering truth-telling to make up for these minor shortcomings.

Last time (in University of Delcita), we followed Miss Coldwater (Andrea Wright) as she pursued her Bachelor's in Guidance and Counselling. Much has changed since then, as the ambitious single mother and colourful dresser tells it, "Did my Bachelor's, now doing my Masters with a little Law on the side."

So we catch up with her on campus, where she's also seeking a part-time office job, much to the chagrin of secretary Shelly Wisdom (Joanna Johnson), the apple of the unseen Professor's eye and the sweetheart of a US-based thug, and Elsayda Josephs (Melisha Holness), the office manager grappling with a rocky marriage and work pressure that pushes her to the brink and eventually lands her in divorce court.

That's when Delcita gets to put her little legal knowledge to the test, acting as Elsayda's attorney-in-training. To the benefit of the audience, that's when the show truly picks up steam and delivers its finest comedic moments. But that's not all. Romance is in the air for Delcita, whose blossoming relationship with hunky paramour David (Robert Hanchard) reaches blissful new heights. Can a proposal be far behind?

Written and directed by Wright herself, Miss Elsayda finds the actor-writer-producer doing what she does best: using a relatable and very Jamaican story to show her fans a good ole time while telling it like it is. At times insightful, occasionally provocative and never less than amusing, Miss Elsayda is a crowd-pleasing success. Tyrone's Verdict: B