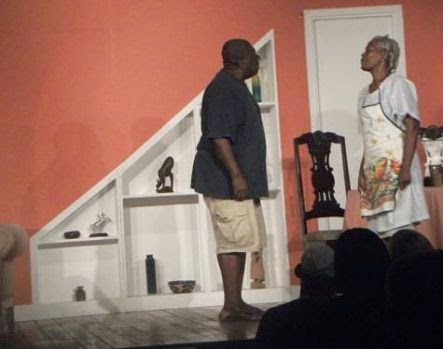 I MARRIED YOU FOR HAPPINESS: Samuels and McCalla star as a couple whose relationship has gone wan; (below) more scenes from the play.

The sight of Oliver Samuels caught in a fierce verbal crossfire with Barbara McCalla in Divorce Papers at the Little Little Theatre reminds one compellingly of Philip Seymour Hoffman squaring off against Meryl Streep in Doubt. Two acting heavyweights going at it and giving the audience a lip-smacking lesson in scene dynamics and character work.

The formidable pairing of McCalla and Samuels is one of the play's strongest assets and, coupled with the varied lighting and vivid set design (which lends the show added visual interest), it's consistently appealing.

Of course, Divorce Papers is yet another effort from the prolific pen of Basil Dawkins, which means first-rate storytelling and the candid exploration of human relationship dynamics and sociological subtext - and ample proof that Dawkins' ongoing collaboration with director Douglas Prout is a creative partnership that continues to yield impressive results.

After cohabiting as man and wife for over three decades, Augustus (Samuels) and Grace Goffe (McCalla), an aging upper-middle-class couple, can hardly stand to be in the same room with each other, let alone share a civilized conversation. The opening scene depicts Augustus laying the divorce papers on the living room table. Accusations of infidelity fly left, right and centre, and between Augustus' belligerent temper and Grace's pent-up bitterness over his fling with the maid, their house is no longer a home.

Small wonder that Grace finds solace in the arms of her youthful bodybuilding lover-boy Wayne (a superbuff Dennis Titus), whom she supports financially, while Augustus strikes up a frisky romance with his attorney's gorgeous assistant Stacey (the ever alluring Maylynne Lowe), who offers him a listening ear and a shoulder to cry on.

But is Stacey secretly expecting a big favour in return? Is Wayne a straight-shooter who genuinely cares for Grace, or just an opportunist looking out for #1? Can Augustus and Grace find common ground amid the chaos to rekindle the passion on which they built their matrimonial home?

In spinning this terrifically acted and captivating yarn of a play about commitment and compromise, age and aging, infidelity and the ties that bind, Dawkins and Prout invite us to consider the institution of marriage as many things, but easy isn't one of them. Tyrone's Verdict: B+