A MAN WITH A PLAN: Mark Wahlberg raises the stakes in high-wire thriller The Gambler 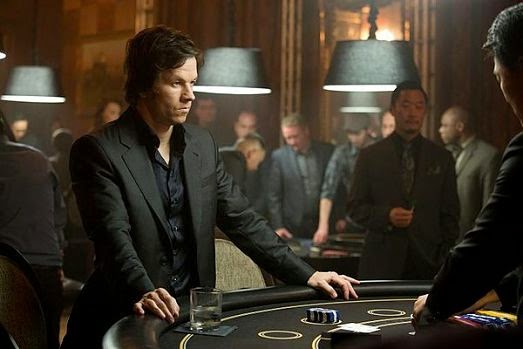 PLAYING IT COOL: The big-screen veteran as the conflicted Jim Bennett.

In The Gambler, we get a riveting close-up of a man teetering dangerously close to the edge, but it's thanks to a web of his own making — and that's precisely what makes the film's events so intriguing to witness. It's like having a front-row seat to the unraveling of a high-roller whose carefree style and habitual recklessness are the catalyst behind his gradual downfall.

Directed by Rupert Wyatt and inspired by a James Caan classic, it's a bruising commentary about living fast-and-loose and the price of dignity. The nearly two-hour drama/thriller sometimes hits a lull, but Wahlberg is a competent actor and his solid performance gives the film a compelling emotional anchor.

Though he enjoys a respectable career as a college-level literature teacher whose students hang on to his every word, Jim Bennett (Wahlberg) is hampered by a singular vice that's slowly eating away at his life: high-stakes gambling. When he runs up an exorbitant debt at the Korean den he frequents, he finds himself way in over his head. Things only get worse when he accepts a loan from a shady character (Michael K. Williams) and seeks out a sly loan shark (John Goodman) when he's unable to come up with the money.

Before long Bennett is a man on the run. Literally. His relationship with his ice-cold dowager of a mother (the imperial Jessica Lange) takes a frigid turn and a mousy student-writer he's interested in (Brie Larson) starts to see beyond his wit and literary cool.

In such films as Boogie Nights, The Departed and The Fighter, Wahlberg showed that he can shine while being part of an ensemble. Here, he taps into his leading-man bonafides, playing Bennett, a man of steep contradictions, with equal parts bravado and gravitas. In the end, The Gambler not only delivers an emotional, almost cathartic, payoff as Bennett discovers his redeemable qualities, but reminds us that if there's anything trickier than knowing other people, it's knowing yourself. TALLAWAH's Verdict: B

Email ThisBlogThis!Share to TwitterShare to FacebookShare to Pinterest
Labels: At The Movies, Current Cinema, Flick of the Week, Mark Wahlberg, Movie Reviews