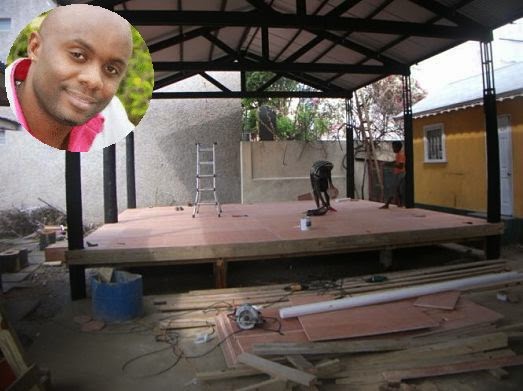 WORK IN PROGRESS: The new space, under construction, opens to the public this weekend. Inset, Wilson; (below) performers in rehearsal with Holgate.

"The vision has always been to create a self-contained space for ourselves to carry out our projects and to do some of our performances," explains Ashé Artistic Director Conroy Wilson, mere days before the popular performing arts troupe opens their Cargill Avenue-based Vibes Theatre to the public. The cozy outdoor space, which includes a large stage and seating area, is still under construction but should be showtime ready for this Friday's well-anticipated premiere of Dead Lef', the troupe's latest musical drama.

To say the least, the Vibes Theatre is testament to Ashé's utter resourcefulness and can-do spirit. What they've done is invest a little over $1 million dollars to convert a shed/fixer-upper adjacent to the property's E-Cafe, into the new performance space. According to Wilson, it will go a far way in easing some of the creative pressures they currently face.

"Theatre space is limited in Jamaica right now, and when you do get somewhere to use, the cost is very steep, so having this will allow us to do our performances and invite the public to be a part of it. "So now we basically have our own theatre," he points out, emphasizing their intention to reach out to the theatre community at large. "Ultimately we want it to become a general theatre space, so will definitely be inviting others to share it with us." Already, the Fabian Thomas-led Sankofa ensemble has secured first dibs, and will be mounting their upcoming production when Dead Lef' ends its local run in March.

This latest addition to the Kingston theatre scene couldn't have come at a better time, especially given the closure last year of the landmark Pantry Playhouse. Enterprising playwright-producer David Tulloch had hinted to TALLAWAH a short while back that his Probemaster team was eyeing a Ruthven Road property for the primary purpose of converting it to a theatre house. "It's a great location for a theatre," he told us. "With lots of parking space, two concession areas. We just need to install some new seating." But with the details and logistics still being panned out, it remains to be seen if Tulloch's dream will become reality. 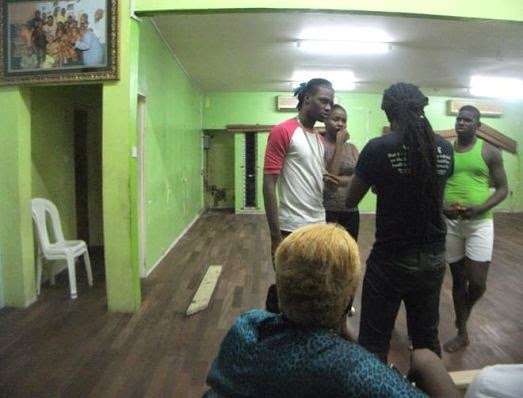 In the meantime, for Ashé this month's opening of the Vibes Theatre is only the beginning of some major long-term endeavours the company has in store for its Cargill Avenue base. They way they see it, with the Green Gables Theatre right next door to their property and ample space remaining for several additions, a veritable theatre village could mushroom over the course of the next decade or so - to create an artistic zone similar to that of London's famous West End or New York's popular Broadway district. "We feel that this little area could become something like Kingston's own theatre strip that people from all over the island and abroad can look forward to visiting. So when persons are planning trips to Jamaica, they know they have to come to the theatre strip."

Big dreams aside, 2015 marks 22 years since Ashé's inception, and it's a milestone that Wilson believes demands serious reflection on where they're coming from and the road ahead. "At the point in our history the focus is on building the people we have with us and growing our methodology, because without a doubt our style is still very powerful," he says. "We definitely plan to expand our reach but we want to branch out and diversify without stretching ourselves too thin."

What is more, the time is perfect for the group's leaders (Michael Holgate is another Artistic Director) to step up the training of the troupe's fresh crop of young talents, many of whom hail from such areas as August Town, Maxfield and Hannah Town. "A lot of them are from projects we've done in these communities, and some of them have been with us for years," Wilson explains. "So we want to continue giving them the exposure now, as it will only benefit the group years down the line."

One therefore understands the great emphasis on fortifying their headquarters in the interim. "The big thing for us is to develop and strengthen our base," Wilson says, "and take our work much, much higher."