KING OF THE RING: Sportsman of the Year, Nicholas 'The Axeman' Walters, reveals his top sporting heroes 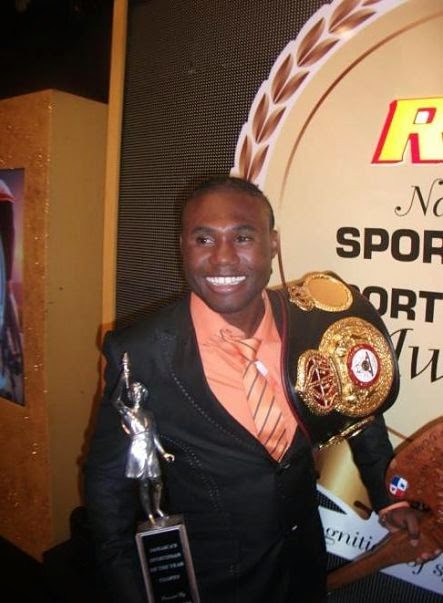 HEAVY METAL: The undefeated champ proudly showcases the fruits of his labour.

When it comes to giving props to the giants of sports whose achievements have greatly inspired him, boosting his courage, Nicholas Walters doesn't skimp on the adulation. In fact, the undefeated featherweight champion, who enjoys a good game of cricket and watching track-and-field meets, readily heaps praise on everyone from star batsmen like Chris Gayle to boxing legend Cassius 'Muhammad Ali' Clay, whose world-famous slogan "Float like a butterfly, sting like a bee" holds special resonance for him. Now that he's well on his way to becoming one himself, it is unsurprising that legendary achievers in sports rank highly in the champion boxer's world. Herewith, his picks:

MIKE McCALLUM: "He's actually my biggest inspiration. He has done wonderful things for the sport of boxing in Jamaica. But I think he could have done more, like maybe open a gym and work with some of the youngsters. I want to reach his level and hopefully I can surpass it."

TIGER WOODS: "I admire how he has dominated the sport [of golf] as a Black man. To me it shows that he works hard. He's a motivation for me to want to achieve at the highest level."

MICHAEL JORDAN: "Jordan is among the all-time greatest for me, not just in basketball but sports in general. In his time he did a lot for Black America, and I see him as a great man on a whole."

USAIN BOLT: "The World's Fastest Man! He brings joy to me and my family. Whenever I'm overseas and I see him running on TV, it feels good to tell people that I know him. He is a tremendous person, and he has done a lot for Jamaica and Brand Jamaica."

CHRIS GAYLE: "That's my sportsman. A big star. [Chris] is an awesome batsman and he has strong arms that get the job done. I think right now he's one of the sporting figures that Jamaican young people can really look up to and see as a role model."