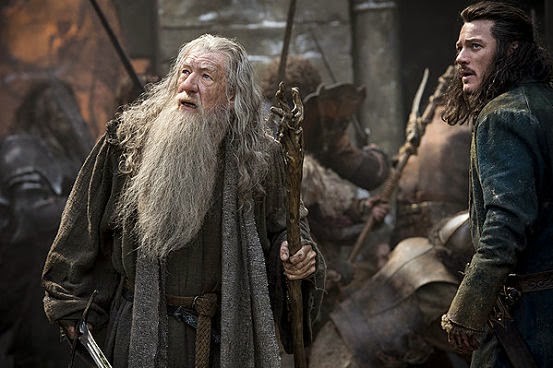 STRENGTH IN NUMBERS: The elfin army prepares for battle; McKellen and Luke Evans.

What has always elevated Peter Jackson's work, especially his film versions of J.R.R. Tolkien's books, is the majestic grandeur and breathtaking cinematography that distinguishes them from the other cinematic epics that regularly storm the box office.

The Lord of the Rings trilogy, for instance, had no shortage of these qualities, in addition to transporting power and jaw-dropping art direction. The same can be said of The Hobbit, which gets a lush, spellbinding finale in this season's instalment The Battle of the Five Armies, a fittingly action-packed and hugely entertaining coda to a series that rigorously tackles themes of loyalty, courage, greed and family honour.

When we last left off with the series, Smaug, the fire-breathing behemoth of a dragon (exquisitely voiced by the magisterial Benedict Cumberbatch) had unleashed a reign of terror on Middle Earth, much to the despair of humankind, elves and dwarves alike. As this latest instalment opens, Smaug is ceremoniously slain, celebration ensues, and things appear to be returning to normal.

But this is Middle Earth where conflict is as commonplace as the air we breathe. The peace is short-lived, as a battle for control of the mountains of Erebor, home of gold beyond measure, brews. Everyone wants to lay claim to the riches and armies begin to mobilize. The legions of orcs are the most frightful, bred for war and primed for dominance.

Battle of the Five Armies is dubbed the franchise's defining chapter and, thankfully, its lives up to expectations, delivering dazzling CGI-generated spectacle and full-throttle entertainment. Ring bearer Bilbo Baggins (Martin Freeman in the titular role), master wizard Gandalf the Grey (Ian McKellen) and dwarf leader Thorin (who develops a serious case of dragon sickness brought on by his obsession with reclaiming his people's lost kingdom) all reprise their roles - and are joined once again by the likes of Cate Blanchett (ethereal spirit woman Galadriel), Evangeline Lily (butt-kicking elf warrior Tauriel) and Orlando Bloom as her brother Legolas, whose courageous manouevres and spectacular fighting skills against the orcs in the heat of battle draw their own hoots and cheers from the audience. TALLAWAH's Verdict: B+

Email ThisBlogThis!Share to TwitterShare to FacebookShare to Pinterest
Labels: At The Movies, Blockbuster Films, Current Cinema, Film Review, Flick of the Week