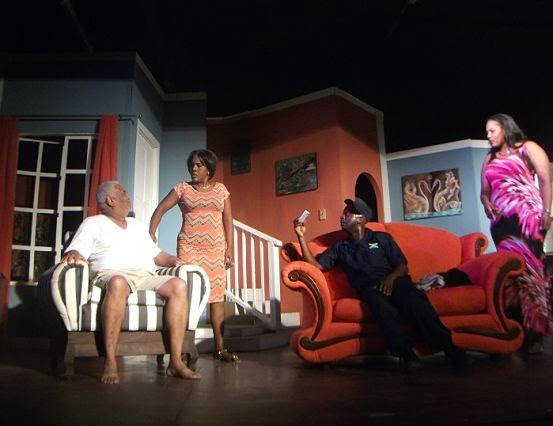 NOW OR NEVER: (From left) Johnson, Silvera, Daley and Harris; (below) more scenes from the play.

It is a truth universally acknowledged that you can choose your friends but you can't choose your family. One is sharply reminded of this while watching the action unfold in Ole Fyah Stick, Dahlia Harris' latest theatrical offering that is both brilliantly acted and rip-roaring fun to watch. A follow-up to Harris' bruising 2014 kitchen-sink drama Her Last Cry, the ensemble production is an engrossing meditation on the ties that bind and relationship dynamics and is populated by four well-drawn and very Jamaican people who will remind you of someone you know.

Take, for instance, the show's centrepiece character Betty (the excellent Deon Silvera), a longsuffering, modestly educated housekeeper who's been in the employ of one Joe Moore (Volier Johnson) since the creation of dirt. Plus, they've known each other since they were kids running wild in the country. Over time, as is the case in so many households here and elsewhere, their bond evolved into something tighter than a boss-employee relationship, and it is this deeply personal aspect that doesn't sit well with Joe's fresh-from-overseas adult daughter Maggie (Harris).

One evening while Joe is outdoors picking mangoes, Maggie aggressively confronts Betty , reads her the riot act and all but convinces her that her security-guard 'friend' Delroy (Chris Daley), who happens to frequent the Moore residence, is more her speed. A woman on a mission, Maggie then pulls Delroy into her web.


There is hardly a false note in the production that pulses with the energy of an edge-of-your-seat soap opera. (Perhaps Days of Our Lives, as Delroy exclaims at one point.) Harris, who pulls quadruple duty as writer, costar, director and producer, knows her actors well and elicits strong performances from them all. While Harris is beguiling as the feral Maggie the bulldozer (and her questionable American accent!) who will stop at nothing to "protect" her dad, Johnson totally gets Joe Moore, presenting him as an aging soul deseperate to hold on to a good thing, in spite of the fear and cowardice that stymie his actions.

As for Daley, the role of Delroy seems tailor-made for him, and he brings that signature mix of alacrity and brio to the stage. Silvera, meanwhile, is the show's biggest revelation, and her portrayal of Betty is an award-worthy portrait of humility, ambition and a diamond in the rough.


To say the least, Ole Fyah Stick, boasting an appealing living-room set design, is full of sparks that eventually explode into fireworks. The intensity, on occasion, reaches fever pitch. But it's the show's spot-on reflection on universal themes ranging from social class and convention to loyalty and prejudice that leaves the most lingering impression.

Can two "unequally yoked" people in love ever find lasting happiness with the harbingers of doom and gloom nipping at their heels? What's the cost incurred for failing to follow your heart? Harris' impressive storytelling not only entertains and challenges our basic notions of romance and self-worth but succeeds in reaffirming that there are no easy answers when it comes to the game of love. Tyrone's Verdict: A-