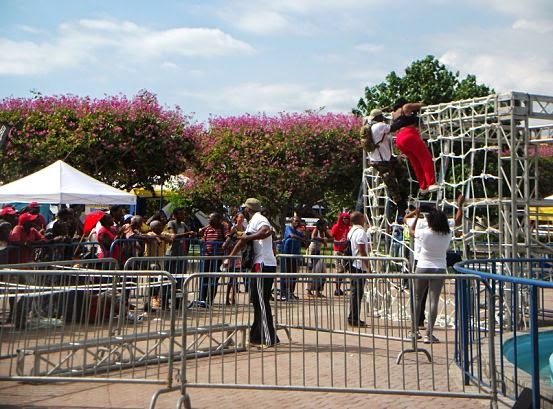 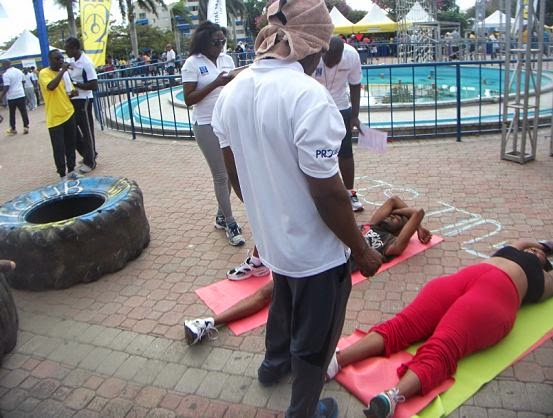 WAY UP THERE: The day's series of rigorous activities were designed to test endurance and push one to the limit.

Studies has long shown that when it comes to matters concerning wellness, women tend to give greater consideration to such matters than men - and the Caribbean scenario is certainly no exception. All that needs to change. So argues NCB's Roland Henry, the chief organizer behind the NCB/ProCare Men's Health Fitness Festival held this past Saturday inside the Emancipation Park.

A large number of men from across the capital, including quite a few college-age chaps and budding fitness junkies, responded to the call to participate, taking on the multiple challenges in the mix, attending the discussion segments and flocking to the booth displays mounted by the Jamaica Cancer Society, the Diabetes Association of Jamaica, and eye-care specialists.

"For NCB, this festival represents an opportunity for us, as corporate citizens, to encourage Jamaican men to pay greater attention to their health and mortality," says Henry, a senior marketing officer. "It's more than just doing regular check-ups and exercising; there are other things to consider like preventative medicine. And a lot of Jamaican men don't want to get into all that. But considering the modern times we are living in, we don't have a choice anymore."

Saturday's festival also had the benefit of wellness experts and fitness pros (Train Fit Club members and ProCare staffers, among them) putting the participants, including a handful of women, through their paces and introducing them to an exciting range of products and services. "A festival like this is ideal for us to spread our message of good health and to attract new clients," Train Fit Club's Joseph Russell points out.

In 2014, NCB staged a similar event but Saturday's own marked the inaugural festival, which will evolve, they hope, into a calendar must-do that will grow leaps and bounds. "We're pleased with the turnout but we plan to team up with some of our corporate partners, like Wisynco, to further engage the public and grow the festival," Henry says. "For us, it's about adding value to somebody's life."