WONDER WOMAN: Jenny Jenny gets real about her balancing act and Season 10 of Dancin' Dynamites 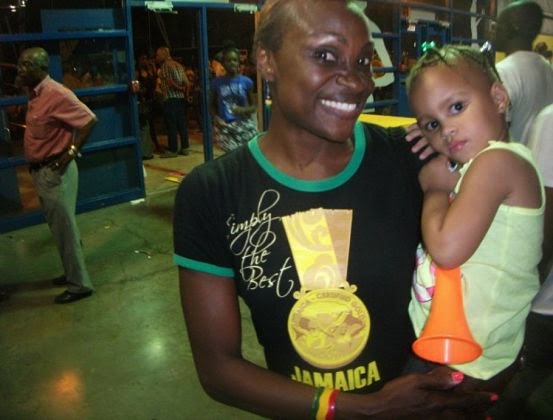 BRINGING UP BABY: The media darling, with her sweet Karissa, at the National Indoor Sports Centre.

From raising an infant daughter (Karissa, now two) to being a devoted wife to catering to her loyal radio fanbase to building a media and entertainment empire, Jennifer 'Jenny Jenny' Small seems to take pleasure in having a full plate. "I don't do anything unless I truly enjoy it," she explains, standing inside the National Indoor Sports Centre in Kingston, dressed in sporty gear with her daughter perched on her hip. "That's where my energy comes from; being passionate about whatever it is I am doing. That's very important to me."

Tapped to emcee the just-concluded Supreme Ventures Sunshine Series, featuring the senior national netball teams from Jamaica and England, Jenny threw herself into the job, keeping the crowd energized (with a little help from a competent in-house disc jockey) and the proceedings flowing smoothly. And, by all appearances, those in attendance appreciated her efforts very much, as proven by the loads of persons making a beeline for her after Tuesday's final game, to offer their thanks and hearty congrats.

By her own admission, Jenny's approachable demeanour and party-starting vibe are traits she inherited from her folks, so connecting with others comes naturally to her. "It's genetic," the former Jamaica Festival Queen and Hitz 92 TM hostess tells TALLAWAH, grinning. "The kind of energy I have comes from within. I don't know how else to explain it."

But motherhood is a whole different ball game for the fortysomething phenom, an experience she finds equally demanding and rewarding. "Women will tell you that being a mother is a tough, tough job, but it's easy when you have a great husband and family that cares," she says, alluding to her home life and balancing act. "I say this to girls all the time, 'Don't have a child unless you have the support system."

That said, for Jenny Jenny there's a certain unique thrill that comes with bringing up a child of your own in the way that she should grow. "It's super. It's by far the best decision I have made. I've never done anything that feels as fulfilling as this. I take her everywhere with me because I want her to be exposed to different things. I want her to be confident." She continues, "There's nothing else I can think of that gives me this feeling. And when I look at her and she smiles back it makes the journey ― the long days, the sleepless nights ― worth it."

And when it comes to her other baby, the hit talent series Dancin' Dynamites (which is about to enter its much-anticipated tenth season on TV J), Jenny Jenny suggests that Season 10 could mark the show's grand finale. "Do I continue? That's what I've been asking myself lately," she remarks, while offering her thoughts on the laudable milestone the show has achieved since making its initial dent in the public consciousness. But such a dilemma shouldn't be surprising for a woman who is so thoroughly steeped in Jamaica's ever-evolving culture, versed in the rapidly changing TV landscape, and ever looking to what's new and next.

In any case, for Jenny Jenny, reaching Season 10 is an achievement worth a parade. "I'm glad I believed in my ideas from the very start, and the success of Dancin' Dynamites shows that a little perseverance can take you a long way." Fans of the show, she adds, should brace for a wild ride. "It's gonna be spectacular. I'm very happy with the ideas we've come up with so far," she says. "We're gonna bring back some of the past winners from over the years to give the fans something to remember. We're pulling out all the stops." Trust, that's no idle promise. Jenny Jenny, the entertainer, is a woman who delivers.