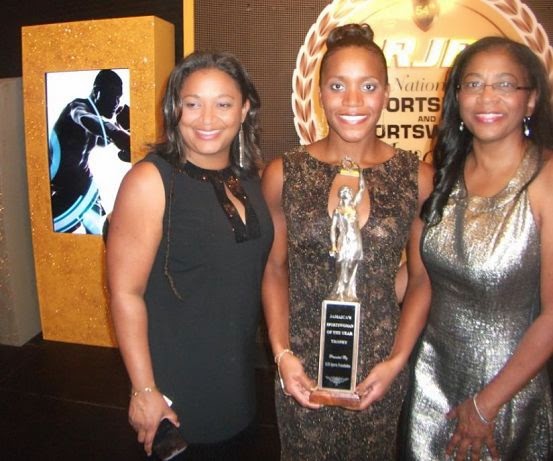 ALL IN THE FAMILY: Atkinson (centre), with mom Sandra and aunt Karen at the Jamaica Pegasus on Friday.

Alia Atkinson has a confession to make: she's an unabashed Harry Potter girl. "I am the biggest fan of the series," she says, blushing uncontrollably, her eyes lighting up as she talks books with TALLAWAH at Friday's RJR Sports Foundation's National Sports Awards, where she copped the most coveted award of the night, Sportswoman of the Year. An avid reader, Atkinson finds the magic and mystery of J.K. Rowling's blockbuster franchise irresistible and is hoping to complete the volumes by the time her first book is due out in stores.

That's right, Atkinson is adding aspiring children's book author to a lengthy résumé that already includes record-breaking swimmer, Olympian and budding philanthropist. "Becoming a children's novelist is something that I've always thought about, and now it's in the works," she explains. "It's fun and I like kids. I think I relate to them well."

Currently in her mid-20s, Atkinson is obviously a big kid at heart, and her fun, playful side readily emerges in conversation ― whether she's cracking wise, mugging for the camera, or riffing on her creative process. "I'm working on the first book, but I'm not the most confident writer at the moment," the swimming sensation admits, laughing.

Even so, she appears serious about her decision to wade into literary waters and is focussed on turning the fear into motivation. While she declines to reveal what the debut effort will explore [it's too early for plot details, she concedes], she's calling it The Chronicles of Kimura, which she intends to complete sometime this year, while balancing her other professional commitments.

Encouraged by her mom to take up reading as a child, Atkinson became so enamoured by the worlds she discovered between the pages that when she enrolled at Texas A & M University, she opted for a major in Psychology and an English minor, with emphasis on Creative Writing. During that period she devoured a lot of historical fiction, and among the most impactful books that made a difference to her are age-old tales about the doings of the British monarchy. "Anything with King Henry and Anne Boleyn," she recalls, without missing a beat.

Now, as an ambitious storyteller in her own right, there's much Atkinson wants to say. But first, she's getting her feet wet in kiddie lit and hopefully she'll go on to establish herself as a bonafide and successful author. Life after swimming is already taking shape for the multi-talented star, who has signed on as an ambassador for the upcoming Sigma 5K Corporate Run (Feb. 22). "I have some ideas for other kinds of stories I want to write," she says, "but I'm taking my time."