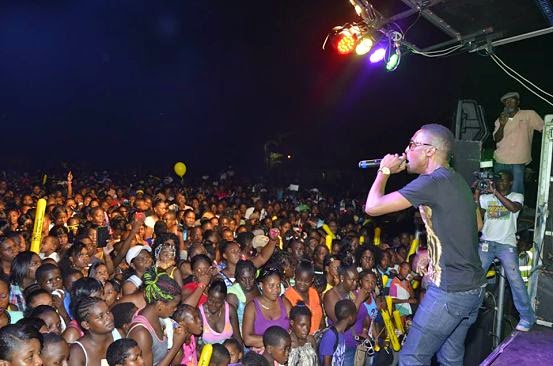 FRONT AND CENTRE: Singer Omari performing on the 2014 leg of the RJR Cross Country Tour.

Eleven years ago the RJR Group launched a Western Invasion, where a broadcast team would journey to the Second City for a series of outside broadcasts and to interact face-to-face with listeners. Soon enough, citizens and business people from elsewhere were reaching out to the RJR team, urging them to bring the invasion to their neck of the woods. So before long it was extended to other parts of the island. More than a decade on, the venerable media house's Cross Country Tour has become a much-anticipated islandwide promotional campaign that brings non-stop party vibes and a host of fun, exciting activities to towns spanning all three counties.

Over the course of the five weeks, the group's mega brands and presenters are showcased, while sponsors are granted the opportunity to trek to all 14 parishes to interact directly with customers. While 2015's iteration - January 30 to March 7 - will be no different (the magnificent seven brands on show, radio and TV broadcasts, church services, sports and family fun days), 2015 brings some special additions.

"Each year we've tried to add something of interest," explains Group Managing Director, Gary Allen. "A few years ago we added the entertainment and sports. This year we're adopting five homes of care, and from each region we visit. Either five children's homes or five infirmaries, and bring our sponsors along with us to see how best we can help improve the lives of the residents."

"For me, it's a great way of meeting the listeners, especially the ones who call in regularly to the station," Jamaican Morning co-host Alan Magnus told TALLAWAH at the recent launch at St. William Grant Park in Downtown Kingston. "RJR has definitely evolved with the times, and you see those changes reflected in initiatives like the Cross Country Tour. Each year feels different, but it's always fun."