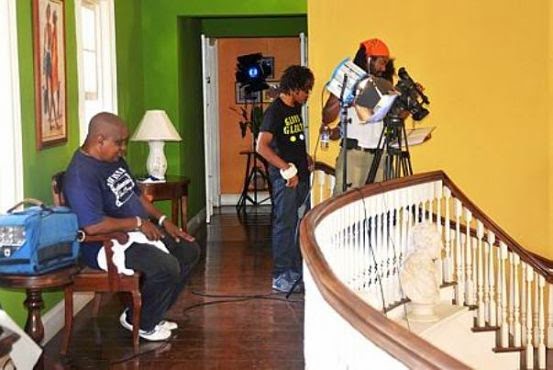 ON THE JOB: Much of the action on The Blackburns is filmed on Jamaica's north coast, where Mediamix if opening new offices.

If you thought Lennie Little-White was off pouting somewhere over the fallout from the NHT/Outameni scandal, which dominated the local news for weeks on end, think again. Instead, the noted filmmaker and businessman's post-Outameni days have been chiefly marked by work, work and more work. To say that he is juggling multiple projects all at once would be a masterpiece of an understatement. In addition to overseeing the editing of Season 8 footage of The Blackburns and tweaking the final cut of his latest icon-on-film documentary Being Barrington, Lennie Little-White is in the throes of getting the company's new north coast digs ready.

Yes, the Mediamix empire is packing up shop, meaning a move from their landmark spot on South Avenue in Kingston to the Garden Parish is well in the works. While the team has ample time left at the old headquarters, which has been their home for over a decade, the relocation process is at an advanced stage. TALLAWAH's recent visit revealed stacks and stacks of boxes, an assortment of video equipment and machinery being prepped for the moving vans, and the team of about four, including Little-White working out of a single upstairs room. "As you can see we're getting things ready for the move, and so currently this small room is our based until everything is finally in place," Little-White pointed out. "But we'll be here for a few more months until then."

The impending change of scenery should yield terrific results for Mediamix, the film crew in particular, which spends the greater part of their work on The Blackburns each season shooting picturesque outdoor landscapes on Jamaica's north coast, and moving in and around the all-inclusive hotels, where a lot of the action, soap-opera style drama, is set.

But as much as we would like to wax optimistic with Lennie about the future of the show and the evolution of his empire, we can't ignore the ten-tonne elephant squatting silently by the door. "In effect, it's an old transaction from 2013. But politically some people think there's a flaw in the armour of the PNP, as far as the sale was concerned," he said, reflecting on the brouhaha that ignited the Outameni saga which, in addition to making headlines, drew parodies and comedy sketches on shows like Oliver Mair's hit theatrical revue Laff If Off Again.

When asked if he feels any anger or bitterness over how the whole thing played out in the court of public opinion, Little-White was quick to dismiss such a suggestion. For the most part, he made clear, Mediamix's work and his leadership remained unaffected by the scandal. "That didn't really impact our operations in any serious way," he said. "What happened the other day is just like somebody call your name in the middle of a mix-up." So there you have it.

With the scandal now a thing of the past, Little-White is hopeful about the future of Mediamix and Palm Productions. In many respects, the impending move up north symbolizes a new chapter, a new beginning. "Things change, and you move on," Little-White concedes. "We don't need as much space as we used to. And because of the advances in technology, the size of the equipment, like the cameras, is much smaller. Now we are doing more with less."