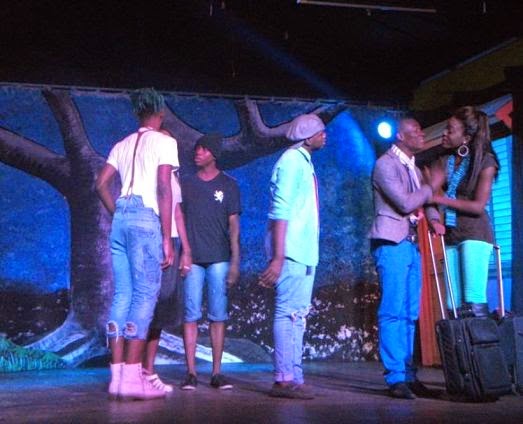 FRIENDS AND FAMILY: Performers gather centrestage in this scene from the musical drama; (below) more scenes from the play.

Michael Holgate clearly has a thing for exuberant theatrical productions bursting at the seams with high-energy song-and-dance and a story that blends community life with detailed family history. (Remember Curfew and Jonkanoo Jamboree.) You get healthy servings of these key ingredients and more while watching Ded Leff, a sort of 'rebirth' production for the Ashé ensemble, which Holgate wrote and directs with equal parts grit and grace.

Comprised of new-generation members of the popular troupe, the cast tackles the roles with no shortage of gusto, resulting in performances that are at once balanced and believable, in spite of the limited acting range of these young performers, many of whom are just beginning to understand the craft.

A bonafide star-in-the-making full of appeal and potential, Faybian Grizzle leads the cast as Jonathan Carson, an ambitious if a tad misguided young chap who returns to his rural Jamaican community from England for his mother's funeral, only to discover that things are vastly different from when he was a boy. Accompanied by his posh fiancée, Shelly (Brittany Bailey), Jonathan must come to terms with the culture clash, new life lessons, and the ridicule poured on him by community members, even members of his own family.

The intensity mounts when Jonathan confronts his father Desmond aka Daddy D (Rudy Tomlinson, terrific) over aspects of his childhood, and sister Ackeema (Toni-Kay Ivy) rakes Jonathan over the coals for abandoning his roots.

For the most part, this is a relatable and very Jamaican saga given a riotously rhythmic core thanks to a full-on reggae soundtrack pulsing with vim and lyrics reflecting the action as it unfolds. Drawing on frequently athletic choreography, the performers interpret vintage and modern tunes by everyone from Damian Marley to Diana King to Jimmy Cliff ― which makes sterling contributions to the show's success.

The same can be said of costars Atardo Henry, Marlon Tomlinson and Sabrina Thomas, who each render standout performances in this rousing tale of family dysfunction, prejudice and nostalgic self-discovery. On the downside, however, I found the lighting a bit too dim on numerous occasions, and the set design is not as functional as it could have been.

Even so, buoyed by Holgate's splendid script and the irresistible music, Ded Leff comes off as a highly entertaining show brimming with life and emotion. Tyrone's Verdict: B