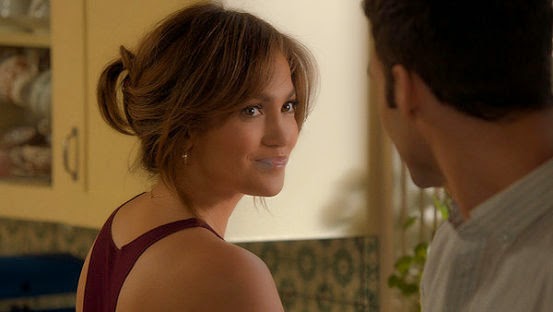 With the exception of Naomi Watts perhaps, does any actress in modern Hollywood play more damsel-in-distress roles than Jennifer Lopez? Be it the put-upon single mother (opposite Ralph Fiennes' millionaire) in Maid in Manhattan, the battered wife who finds her strength in 2002's Enough, or the estranged spouse on the run from her crazy ex in Unfinished, the bombshell Latina consistently makes a point of bringing that authentic blend of vulnerability and, you have to admit it, conviction to the screen.

For any other actress, one could easily sum it up as a serious case of typecasting, but with Lopez it's more a case of a talented actress taking on acting challenges more in tune with her natural abilities.

In this month's lukewarm thriller The Boy Next Door, Lopez stands out as Claire Peterson, a sweet and nurturing middle-aged literature teacher who specializes in the classics at the local high school, while raising an impressionable teen son (Ian Nelson) and fighting off loneliness as her marriage to the absent, adulterous Garrett (John Corbett) lurks "in limbo."

When her son's athletic school buddy Noah Sanborn (Ryan Guzman), who just so happens to live next door, puts the moves on her, Claire, who's never had reason to channel her inner cougar, finds herself embarking on an illicit, lust-fuelled affair with the fiery young Marlon Brando look-a-like, who quickly makes her the subject of his obsessive affections.

Before long, boundaries become blurred and things begin to spiral dangerously out of control, threatening Claire's familial stability and the other things she cherishes the most. You will recall the teen-fling drama that rocks Cate Blanchett's Sheba Hart in Notes on a Scandal.

Directed by Rob Cohen, working with a tepid script by Barbara Curry, the film comes up short on the requisite thrills and coherence to efficiently woo the audience. In the end, The Boy Next Door comes off as a poor man's Fatal Attraction for the Whats-App generation.

But what ends up saving this movie from the trash bin altogether is Lopez's sincere, spot-on portrayal of a woman whose flirtatious romp with a cub explodes into a life-and-death nightmare. Then there's that spiky urn by Broadway darling Kristin Chenowith as the school's vice-principal and Claire's gal pal, Vicky. Hill Harper, meanwhile, rounds out the main cast as Principal Warren.

In spite of its shallow take on adultery, faith and trust, the briskly paced movie will remind you that in the jungle out there, all that glitters is not gold. Tyrone's Verdict: B-